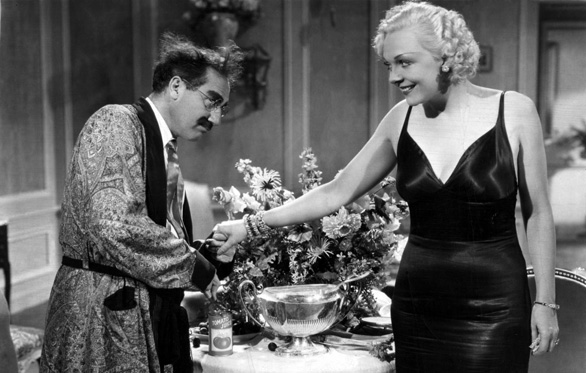 You could win A Day at the Races when you screen the film.
(Credit: Alex Film Society)

Hollywood has mastered the art of fooling us. Don’t be offended; I’m not insulting your competency. The people calling the shots on set are skilled and trained at saving money by using locations in Los Angeles in lieu of traveling to actual exotic places.

For example, Pearl Harbor (2001) was not completely shot in Hawaii. Union Station in downtown Los Angeles and the Queen Mary in Long Beach were just a few of the locations stuck in the film – and quite convincingly, too. Union Station was also employed by Ridley Scott’s 1982 film Blade Runner, which was supposed to take place in the scary year of 2019. Films like The Flintstones (1994), which takes place millions of years in the past were shot at Vasquez Rock in Agua Dulce.

However, many films are supposed to take place in our city. I don’t know about you, but it always makes me happy when I am able to identify an L.A. landmark while I’m sitting entranced in my seat at the theater. Roman Polanski’s masterpiece Chinatown (1974) was shot virtually entirely in Los Angeles and outlying areas. If you look closely you can recognize the Biltmore Hotel as well as Chinatown, obviously.

And then there are the films that either draw me in or completely disappoint me. These films are shot predominantly in backlots and use sets that were built for other films or television shows.

The creepy house on the hill from Psycho (1960) is still there, as are parts of the 2000 live-action remake of How the Grinch Stole Christmas. I can accept those movies because they are distinct constructions.

Then there are films that were noticeably shot in a backlot on a generic set to easily and cheaply produce blockbuster hits. Take another look at Bruce Almighty (2003) and you may notice how similar the New York in that film looks like a very Victorian London in The Prestige (2006).

Hollywood, we’ll forgive you as long as you at least try and make it less obvious. After all, not everything can be filmed on a pre-made set. In fact, the 1937 film A Day at the Races starring the Marx Brothers (Groucho, Chico and Harpo) was actually shot at Santa Anita Park, Calif.

Don’t believe me? See for yourself. The Alex Film Society, a non-profit arts organization dedicated to the preservation and presentation of classic movies, is hosting two special screenings of the film in fabulous 35mm black and white.

Maureen O’Sullivan is Judy, a farm owner who risks losing her sanatorium. Dr. Hugo Z. Hackenbush (Groucho) is a horse doctor posing as an accredited human doctor, and Tony and Stuffy (Chico and Harpo, respectively) are two racetrack hustlers. The three brothers are there to help Judy, who is at risk of losing her sanatorium to a local mobster looking to turn it into a casino. Margaret Dumont also stars in the classic film about which the New York Times wrote in 1937, “Saddle-up for the time of your life because the Marx Brothers are at it again.”

Dorothy Dandridge makes her film debut, and members of Duke Ellington’s Orchestra including singer Ivie Anderson are featured in the film. Also included on the big screen is a Bugs Bunny cartoon, Slick Hare (WB 1947), and the News Parade of 1937 newsreel featuring Amelia Earhart’s disappearance.

You can catch the film at 2 p.m. and 8 p.m. Before the 8 p.m. screening Joe Adamson, author of Groucho, Chico, Harpo and Sometimes Zeppo will be on stage to present the film.

The best thing about this event is that you stand to win more than a nice moviegoing experience. Audience members can win box seats to the Santa Anita Park races, including valet parking courtesy of Santa Anita Racetrack. The lucky grand prize winner will receive dinner for two at Santa Anita Park’s exclusive Derby Restaurant, plus two box seats.

A basket of Marx Bros memorabilia goodies, dinners and other items will also be raffled at each screening. At least it’s for a good cause: All proceeds go to support the Alex Film Society.