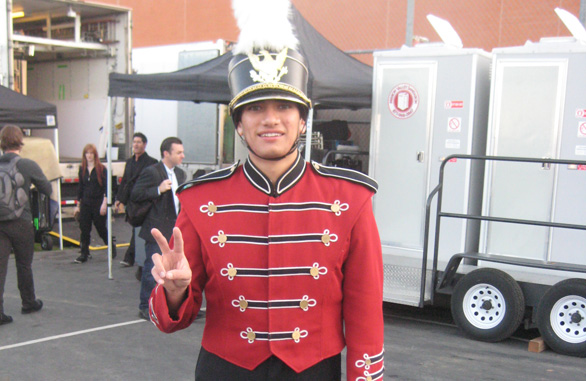 Guido Jimenez on the set of
(Credit: Elizabeth Geli)

The anticipation for the spring premiere of “Glee” has been hyped by numerous rumors leaking special celebrity guest appearances. With new drama, laughs, love and most importantly, song and dance, it is sure to be a big mid-season opener – especially with the news that Madonna will be making her “Glee” debut.

However, this article will not be focusing on the characters of “Glee” or Madonna. Instead, it is about another celebrity, the University of Southern California Trojan Marching Band, the self-proclaimed “Greatest Marching Band in the History of the Universe.”

“Hollywood’s Band” makes yet another television appearance that adds to their impressive resume that includes performances on the Academy Awards, “American Idol,” the Grammys, “The Tonight Show with Conan O’Brien,” “Dancing With the Stars” and many more. The episode will feature a basketball game, during which the TMB will act as the McKinley High School Marching Band and perform at halftime to one of Madonna’s hits.

Senior TMB trumpet, Guido Jimenez elaborates on the experience: “The band performs with the cheerios, and it was pretty much a little halftime show. They wanted it to be authentic; they didn’t want to train professional actors how to march. Their job is to dance, ours is to play and march.”

“He [the choreographer] wanted us to glide step, which isn’t what we normally do. So we showed them our “drive-it” style. He loved it, and was ecstatic for how great marching in sync looked. He wanted to incorporate it as much as he could into the routine.”

However, the fast drill didn’t allow for the “drive-it” style to be used the whole time. So a combination of that and the glide step was used during the routine. The TMB members were excited about contributing this particular piece of flair into their performance.

“This is cool ’cause everyone is really going to know it’s [the USC Band],” Jimenez says.

But alas, the 15 seconds of fame are often well deserved after the amount of work that gets put into programming a show like this.

Jimenez continues, “This gig was a lot different and a lot more demanding than other gigs we’ve done. We’ve done stuff filmed in front of a live studio audience, which is basically, you go out there, you do it and you’re done. Quick and easy. But by the end of the day we were pretty burnt out.”

Sophomore TMB trumpet Keith Yoerg agrees: “My least favorite part was the first practice we had, and I think I can speak for most of the band when saying it was a very tiring day.”

Jimenez adds, “It was fun, but it was a pain. ‘Run it from the top, do it over. And over. Change a few moves and steps. Do it all over again, including the new moves.’”

However, Jimenez did find compensation for the hard day of work.

“The food was really amazing though. It was fantastic,” he shares.

Although he and other band members were exhausted from the extensive rehearsals and shoots, Yoerg can appreciate this effort.

“My favorite part of the whole experience was that I got a firsthand view of what working on a TV show is like. For instance, when watching a show it’s easy to forget what a large number of people there are who never appear on camera, yet they are the ones who make sure the final product looks as good as it does.”

One of those people Yoerg refers to is choreographer and co-producer Zachary Woodlee. The band spent a lot of time with him, and Woodlee put the effort into getting to know them as well.

“He got a kick out of our band names. He introduced us with our band names to the director, cast and crew. Everyone was laughing their butts off,” says Jimenez.

The collaboration between the cast and crew, Madonna and the USC Trojan Marching Band is sure to “set the stage” for the rest of the season of “Glee,” which premieres April 13 at 9:28 p.m. on Fox.

There will be a sneak preview of the “Glee” spring premiere episode and fountain show debut at the Grove April 10 from 7 p.m.-9 p.m.