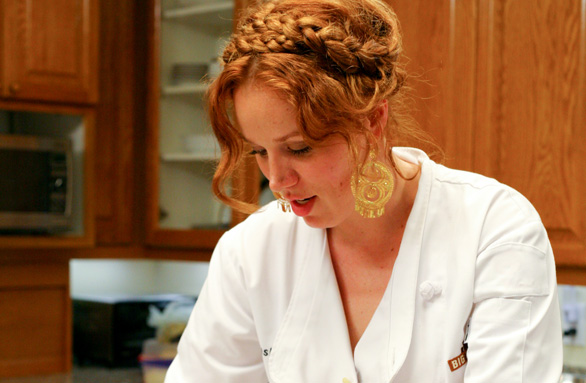 Being on a TV show is glamorous, right? It’s all lights, camera, action as assistants flutter around offering you a selection of fruits to be washed down by champagne sucked through a sippy straw while makeup and hair people primp you to perfection, isn’t it?

Then how did I find myself covered in soot, shoes and pants drenched in freezing cold spigot water, fingers singed from pots grabbed too quickly from an open campfire, cooking a meal for six millionaires who were “glamping” (translation: glam camping)? Because I’m on the Food Network’s newest series, “Private Chefs of Beverly Hills,” a docu-soap that chronicles the travails of six personal chefs who cater to the rich and demanding in Southern California.

While I’ve dreamed of being on the Food Network for as long as it has existed, this wasn’t what I had in mind. I’ve been a private chef since I was 16, working for clients from suburban families to movie stars, and I thought being on television meant my days of toil were over. I had visions of Paula Deen calling me “Darlin’” while we melted a pound of butter or Tyler Florence and I doing something ultimate. Instead, I’m bent over a fire, battling the elements in the wilderness, hustling to make a gourmet meal for a group of men with the combined net worth of most small nations as TV cameras follow my every move. And there isn’t a makeup person in sight. Curses!

The wind whips over distant snow-capped mountains, sending smoke hurtling into my eyes, as I stir a cauldron of “Cowboy Caviar” Soup with “Hot Dog” croutons (creamy black-eyed pea soup with diced chicken sausage and jalapeno sautéed to a crispy, crackling golden brown) and can’t help but laugh. If I’ve learned anything from being a private chef, it’s that the more money people have, the crazier they tend to be, and this is completely nuts. Overhead an owl flies through the garnet sunset sky while a shrouded watchful Cyclops lurks somewhere in the distance, filming away. I dip a spoon into my soup and taste. I may be in desperate need of a flat iron and some pressed powder, but I’ll be damned if this soup isn’t downright delicious.