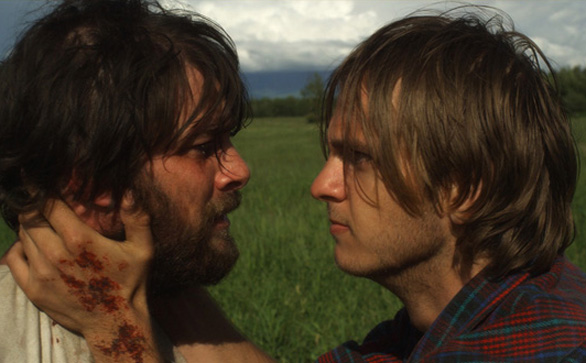 Director Robert Saitzyk creates an engrossing and satisfying film with his latest project, Godspeed. In this suspenseful tragedy, Joseph McKelheer plays Charlie Shepard, a modern day faith healer, who claims that if you just believe, then his gift will heal you.

However, Charlie has been living a double life; he’s been seeing a hooker, his marriage is failing and his alcoholism is ready for a second round. But that’s not the problem. Trouble arises when, after an unsuccessful night of showy healing, drinking and a half-assed affair, his wife and child are brutally murdered by unknown assailants.

The harrowing act throws Charlie into the grips of his illness and a shabby little trailer somewhere deep in the Alaskan woods. That is, until one day Sarah, played by the courageous Courtney Halverson, appears to him and asks for help with her troubled brother, Luke (Cory Knauf), in a tragic episode that reveals truth, violence and whole lot of tragedy.

Knauf is impressive. His mere introduction not only sets the movie’s cynical energy, but also puts the story in motion. In fact, his portrayal of Luke is half the reason the film is so deliciously satisfying in the end.

Godspeed delivers the same visual quality as most big-budget Hollywood films. The story truly capitalizes on the gorgeous Alaskan terrain and rural communities to create the cultish notion on which the film thrives. In addition, Saitzyk masterfully finds the perfect amount of violence in a story that deals with self-righteous anger and the intangible price of retribution, without being grotesque.


Godspeed releases in select theaters April 9.
Article posted on 4/6/2010
This article has been viewed 3076 times.