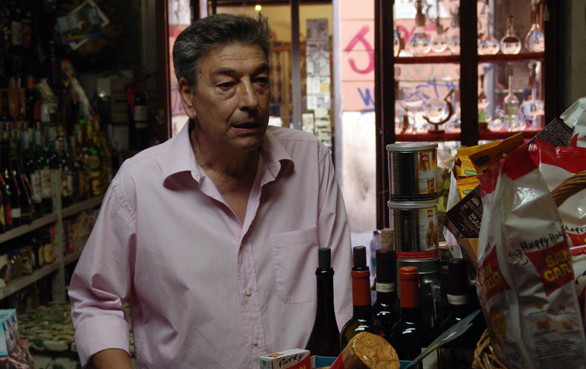 Who could believe that this is the man who had a hand in writing the gangster epic Gomorrah? In his directorial debut, Gianni Di Gregorio tries his hand at a light comedy, taking on a semi-autobiographical role as a middle-aged do-nothing who lives with his demanding elderly mother. Due to his lack of financial management skills, he owes a few favors to his building manager and doctor. He is forced to make good by taking in their aging relatives over a holiday.

What begins as a potentially awkward annoyance builds into a friendship between four rambunctious women who refuse to allow aging to get in the way of having fun. When life wants to peg them down with curfews, medication regimens and other restrictions that come with advancing years, they respond with defiance, passing the time with palm readings or sneaking out to the bar for a good stiff drink.

Gianni could teach a lot to men here in America with the delicate manner in which he regards each woman with a measure of respect that seems to only be found in the old world these days.

Unfortunately, I wanted so much more from the ladies. They were likable, but we don’t really get enough of a backstory to love any of them. And it’s a shame too, because these ladies are marvelous newcomers to the screen and it would have been glorious had they really been given more of a chance to shine.

Gianni too, along with his friend Viking, is a mere shadow, so subtle as to almost blend into the background. They also leave something lacking.

You have to hand it to Di Gregorio, however, where this film could have fallen into an endless number of clichés, he delivers just enough of the unexpected to keep the viewer engaged. The characters are real and his directorial style is a bit like peeking in from a window across the way, enough intimacy to feel mildly ashamed at the voyeurism.


Mid-August Lunch releases in select theaters April 9.
Article posted on 4/6/2010
This article has been viewed 1475 times.