The Genius of the Pirates Trilogy 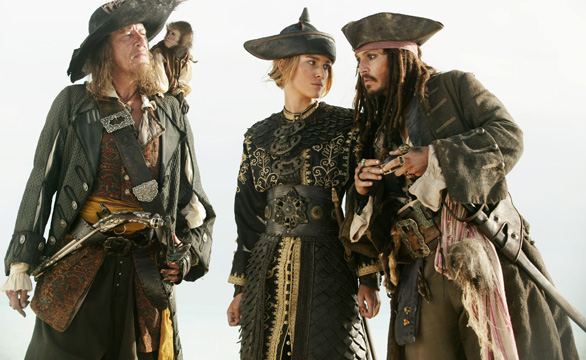 Today I’m going to be talking pirates. More specifically, Pirates of the Caribbean. Because I fucking love Pirates of the Caribbean! The POTC trilogy, produced by Jerry Bruckheimer, written by Ted Elliott and Terry Rossio and directed by Gore Verbinski, is very dear to my heart because the films are the ultimate example of high-end filmmaking gone right. Although a bit lighter than The Lord of the Rings Trilogy, like those films POTC provides an almost perfect blend of humor, action, drama, suspense and horror.

The first one, The Curse of the Black Pearl, was a huge hit in 2003 and everybody for the most part has a love for it. The second one, Dead Man’s Chest, came out in 2006 and broke box office records. The third, At Word’s End, came out in 2007, and while it didn’t shatter all the records of the previous one, it was still a massive hit and a huge feather in the filmmakers’ caps.

While most people do love the first one, there is a lot of criticism of the second and third films. Personally, I think that the POTC sequels are as great as sequels can get and make up one of the best trilogies in motion picture history. There are several reasons why these films are the groundbreaking achievements that they are, and I’m going to give them to you one by one. These are not in any particular order, but when added up make for cinematic genius.

1) The scripts. The writing team of Ted Elliott and Terry Rossio is one of the best writing collaborations in the business today, and they are masters of their genres. These guys really understand big epic storytelling, and it’s only through that understanding that good scripts are written.

2) The direction. Gore Verbinski was born to direct these films. End of story.

3) Jerry Bruckheimer. Jerry is arguably the king of action films. Over the course of his career he’s produced tons of epic classic action films, and it’s a testament to his own creative genius that the films came out the way they did.

4) Johnny Depp. Characters are what make good films great. All too often you get well-made, well-written, well-plotted films that just have generic cookie-cutter characters. While the films are good, they lack a really strong central character. What Depp brought to the character of Jack Sparrow is arguably the one thing that pushed the first film over the fence into classic territory, and ultimately, that’s why people turn out in droves to see these films. For Captain Jack.

5) Great villains. The protagonist is only as good as his antagonists, and I’ve always said that when you hire great actors to play roles in films that ultimately aren’t about the performances, you get classic shit. Geoffrey Rush as Captain Barbossa in The Curse of the Black Pearl and Bill Nighy as Davy Jones in Dead Man’s Chest and At World’s End are the perfect counterbalance to Depp’s Sparrow. The pirate act is a pretty hammy stereotypical routine, but when you hire actors like Rush and Nighy, they breathe real acting craft into it, which gives it credibility.

6) The special effects. The effects in these films are what dreams are made of. I’ve always said that the best special effects are a blend of practical and digital effects. When the audience can’t tell when it’s real and when it’s fake, you’ve done your job. When I came out of the theater after seeing Dead Man’s Chest, I thought that Davy Jones’ tentacles were real, and that’s coming from someone who studies effects and always knows when something is digital. The most ambitious aspect of the production was the construction of a tank built right onto the side of the ocean similar to what was done on James Cameron’s Titanic in order to actually create the feeling that you were out at sea. No matter which way you look at it, these films are brilliant. At the end of the day, a great story was told in these films, supported by the filmmakers’ understanding of the craft of story.

As it turns out, the story will continue. A fourth film in the series is currently in production titled Pirates of the Caribbean: On Stranger Tides, and although Verbinski is not returning to the director’s chair, Rob Marshall (Chicago, Nine) is replacing him. I like Marshall, and I’m very intrigued to see where he’s going to take it. Elliott and Rossio are continuing their writing duties and Bruckheimer is again producing, so as long as most of the creative team remains in place, the adventure continues, and everyone who doesn’t like the Pirates films can kiss my ass.