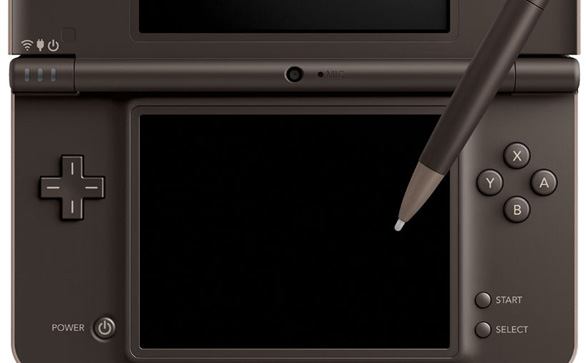 If you only came into the handheld gaming world within the last decade, you might think that portable gaming is all about being small. As the technology has progressed, we have seen progressively thinner systems and even tinier cartridges. You would have a good reason to believe that better handhelds mean smaller handhelds. You would be at least partially wrong.

To be fair to the smaller-is-better movement, any of us who remember the classic Game Boy can tell you how nice it is to have a system where the screens take up more than half of the system’s face. The old handhelds were horribly bulky, and yet it would still be a real struggle to look over your buddy’s shoulder to see how he was doing at “Tetris.” Newer portables – even those that are made to fit comfortably into your pocket – have succeeded at making the hardware smaller even as the screen size has remained the same or even grown larger.

As far as Nintendo seems to be concerned, however, smaller may no longer be better. Their newest portable system – the DSi XL – is all about big. While the original DS may have been fairly big, the DSi XL looks and feels fairly massive. Of course, this larger system makes use of almost every inch of the gaming surface, offering two screens that are 93 percent larger than the DSi and a more immersive gaming experience.

While some may argue that a system that is so big that it doesn’t fit in your pocket goes against the idea of portable gaming, it could just as easily be said that portable gaming no longer fits on smaller systems. Modern portable games are far more detailed than the consoles that were around when the Game Boy was first introduced, and yet the screens never grew as the games became far more detailed. With the larger screens, you can really appreciate the deep details that were built into newer DS games.

Not only do the larger screens mean that you will be able to appreciate the graphics, but it may actually make you a better gamer on some games. If you have ever suffered from accidentally covering part of the touch screen or have desperately tried to tap a point on the screen that was too small, then playing the DSi XL will be a welcome change. Of course, if you miss the experience of dragging a stylus that takes up a fifth of your screen, the DSi XL comes with a massive, pen-sized stylus that will be a much-needed relief for players who suffer from tiny stylus syndrome.

Bigger screens offer more than just an enhanced individual experience. The DSi XL offers the unique ability to share the gaming experience with your friends in a way that games on smaller screened handhelds simply couldn’t. Now, players can show their friends more than just the top screen when they are playing their new game. Granted, there is still just one person holding the stylus, but it gives everyone the opportunity to share the playing experience.

Admittedly, a larger screen does mean that some games have a slightly grainy look to them, but it is not really that bad. The graininess is very subtle, often to the point where you have to be actively looking for it to see it, and many games do not seem to have any display problems at all.

Before you presume that the DSi XL is just about bigger screens, rest assured that all of the features of the DSi are readily available in the DSi XL. The console comes with the dual camera set-up, the wireless and WiFi connectivity and the DSiWare functionality that DSi users have grown used to. The system even comes with three pre-installed games: “Brain Age Express: Math,” “Brain Age Express: Arts & Letters” and “Flipnote Studio.”

The bottom line is that DSi XL is at its core a DSi that was built to fully showcase the ever-expanding Nintendo portable library and to allow players to share the experience with their friends. It may be resting its innovations on this one trait, but it is an impressive asset to boast about. If you own a portable system just to be able to keep a game system in your pocket, you may be better off with a classic DSi, but for those who are willing to trade portability for a more intense, communal gaming experience, the DSi XL is a great handheld.