'Only Death Can Stop Us': An Interview With Colin Abrahall of GBH 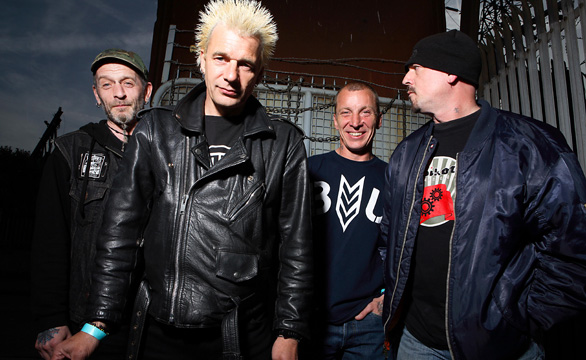 In the last half-century, there’s arguably only one English city that could rival Detroit, Mich. for its working-class, factory-town rock ’n’ roll. That city is, of course, Birmingham. It’s probably best known as the birthplace of heavy metal, giving us Black Sabbath and Judas Priest (and eventually Napalm Death). It’s no surprise, then, that seminal punk rockers GBH would come out of Birmingham, since they are a monument of hardcore. Their feral sound helped lead a defining punk rock British invasion in the 1980s, influencing Metallica and Rancid and providing a template for countless bands today.

To get that sound, says lead singer Colin Abrahall, “You don’t need a heap of equipment, just a couple of guitars and a cheap drumkit.”

Still true to this bare-essential purity, GBH has just released the fragrantly titled Perfume and Piss, their 11th studio album (though their drumkit today hardly sounds cheap). Abrahall recently answered many of my questions in an e-mail interview and shed some light on the new album, the band and the punk sound of the last 30 years. (It’s worth noting that I myself saw them in Pasadena, Calif. in 1983, early in the first of their three decades as a band. “Wow!” says Abrahall, “I remember that show!”)

The name stands for “grievous bodily harm,” a UK legal term, but they didn’t form to revel in violence. Quite the contrary: “We got together at the tail end of 1979, just messing about in a bedroom. Something to entertain ourselves when the pub closed.”

In fact, that explains a lot, because one thing that always struck me about GBH was the hint of a wry smile behind Abrahall’s raspy wail. It set him and the band apart from some of their more stern compatriots, like Discharge, Conflict and the Exploited.

The wryness comes in handy when on tour. Once, in a hotel lobby, a group of Girl Scouts mistook the band – known for their signature leather jackets and bristled hair – for none other than the Pretenders. Without missing a beat, GBH played the part they’d been given. When the girls asked where Chrissie Hynde was, the boys said “Oh, she always stays in a different hotel.”

The tone of Abrahall’s recollections is refreshingly upbeat, considering the band still tours in a van – even when playing on the Vans Warped Tour (no pun intended). Perhaps it is the payoff of persistence and a sense of integrity, revealed in the song “Ballads,” which exhorts bored youth to create meaning in rebellion. Persistence, really, is GBH’s theme.

The musical core of Abrahall, Jock (on guitar) and Ross (on bass) remains intact. In all these years, did these three ever confront a time when GBH might break up?

“No, not really,” Abrahall bluntly states, “Only death can stop us.”

Indeed, have their “left wing/socialist” politics changed in 30 years?

Are they still on good terms with their English cohorts from years past, Discharge and the Exploited?

The tenacity of the band largely stems from the fact that they’ve been friends since childhood.

“We are like a family. We are there for each other.”

The consistency shows in the sound of Perfume and Piss, on which fans will hear the same energy from their 1982 classic City Baby Attacked by Rats, but with flourishes of hard rock (“Cadillac One”), moshpit-ready tempo changes (“Dead Man Walking”) and power-chord echoes of Stiff Little Fingers (“This Is Not the Real World”).

Abrahall reflects on his most recent studio experience.

“It is important to have fun whilst recording,” he says, “and I think you can hear it in the music.”

Nonetheless, he does miss the days of analog.

“I don’t know if I am a fan of Pro Tools. I used to like watching the big tape reels going round, and it all seemed a bit more organic instead of watching a computer screen.”

It’s all been fun. In fact, while making loud rock ’n’ roll, GBH lives by this philosophy: “Have fun and just be nice to each other.”