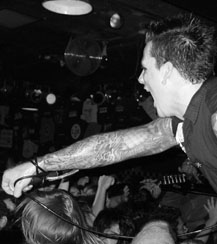 This year’s "hardcore" turned out to be the "screamo" of last year and the "punk" of two years ago, huh? Take a good genre, water it down with lame bands, oversaturate it with copycats, and tell the leaders of said genre who make it onto MTV that they’re sellouts. This is an easy formula for making any subdivision of rock popular, and for getting those bands cover stories in [insert name of cutting-edge, better-than-you indie publication here].

When Bleeding Through played this benefit show at Chain Reaction, they seemed to have brought with them everything that’s right with hardcore and everything that’s wrong with it too. Not one, but four bands provided uninspiring opening sets to show you exactly how it feels to have your patience and sanity falter and snap, like bad feedback from a broken amp.

First-openers Stricken did have redeeming guitar work, mixing groove-laden strumming and hand-blurring shredding. The funk element added an interest-grabbing flavor to their set, but unfortunately, the non-guitar holding members of the band were not so likeable. If the two Stricken guitarists can make such a thing called dance-core work, they can do better than the rest of their band.

Fellow openers The Hate, The Mistake and Killing Theory proved to just be downright forgettable. Or maybe selective memory is blocking their set from my memory, but rightfully so.

If there was any lack of interest from the previous three hours of bad music though, Bleeding Through reminded fans exactly why they sat through all of it willingly.

Walking out like they were taking the stage at the mega-Forum, the band owned Chain Reaction and all of its attendees, from the second frontman Brandan Schieppati let out the first ear-shredding notes of opening song "Love Lost in a Hail of Gunfire."

You’d be hard-pressed to find a band in hardcore who is as brutally raw as Bleeding Through. Moreover, its members displayed at this show. It would be near-impossible to find a band that performs with as much passion for their music, and can inspire any audience simply by how into their own music they are.

Bleeding Through proved to be true performers, knowing how to be engaging without needing to steal the spotlight from one another. From Schieppati’s tumbling about the too-small stage, to bassist Ryan Wombacher’s bass-god stoicism, to keyboardist Marta’s wild headbanging behind her "ivories," each of them showed distinct personalities while displaying cohesive musicianship.

As they crashed into anyone or anything in their way with reckless abandon, all the while yelling along in the background to Schieppati’s vocals, the crowd matched the band’s intensity with just a little more fervor than the oh-so-intimate Chain Reaction could handle.

Even in the midst of flailing limbs and 100 percent indoor humidity, Bleeding Through’s fans never wavered in showing their (aggressively) fierce dedication. In turn, the band gave their fans what they came for and then some with their signature brand of raw grit.

Closing their set with fan-favorite "Wings of Lead," the band left the crowd yearning for more. If it were up to them, though, we would have been in Anaheim all night.