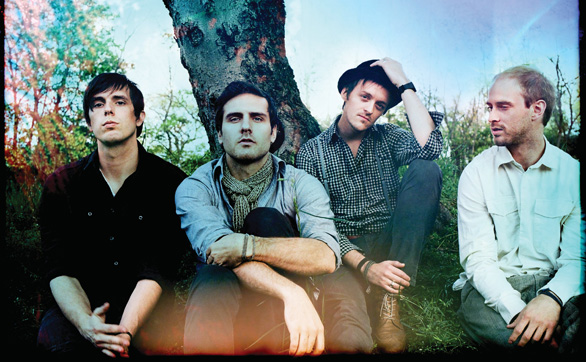 Indie and pop have often been considered to be diametrically opposing concepts and genres as far as music is concerned. Even in a time when a band like Kings of Leon can win a Grammy, it’s either one camp or the other, and bands that win Grammys aren’t indie anymore.

The Indiana-based four-piece outfit of Paper Route, however, takes issue with that mentality.

“I don’t know why people are so turned off by pop. It used to be some of the most creative music there was,” says frontman J.T. Daly.

Given the age-old debate of pop versus indie – and the equally tiresome pigeonholing of immaturity versus pretentiousness – what the members of Paper Route are doing with their music might be considered blasphemous. Daly, bassist Chad Howat, drummer Gavin McDonald and guitarist Andy Smith are attempting the impossible by being the band that successfully bridges that gap between fandoms.

“That was kind of our vision from the start, to maybe be the coolest band that pop kids listen to and the poppiest band that snobs listen to,” Daly jokes.

Though touring with the likes of Paramore and Owl City might seemingly cement its assigned genre in stone, the foursome has garnered acclaim from across the musical spectrum for its ethereal brand of atmospheric rock. So how does a band go from playing tiny Silver Lake dive bar clubs in front of jaded hipsters to playing ballroom and amphitheatre venues filled with screaming teenagers?

“Same thing, you just turn it up a little bit,” says Smith with a laugh.

“We try to be sensitive that we’re writing because we’re excited about an idea, rather than purely based on the discipline of writing something. Because that gets stale really quick,” says Smith. “When we moved to Nashville, we saw these singer-songwriters, where the strength of the song just came down to the lyric and the voice. We were fascinated by that because we previously came from rock bands where it was how raucous you were and how much you could destroy the stage every night. This was pretty much the antithesis of that, where it’s all about the voice, the lyric and almost how quiet you can get. I think that pushed us further into that honest storytelling world.”

Though Smith says the song lyrics on the band’s debut full-length, Absence, are roughly only half narratives taken directly from personal experience and half figurative storytelling containing fragmented history, certain ones hold quite a bit of weight with him.

“The one song that the set hinges on for me is ‘Are We All Forgotten,’” he says. “I’ll know how the rest of the set is going to feel as soon as that song happens.”

Daly likewise has his own select tracks that strike a chord with him.

“‘Dance On Our Graves’ for me. As far as what I contributed on the album, that one was probably the hardest for me to write, just to be that honest and then try to mean it every night,” he says. “If I don’t mean it on stage, it’s just a waste of my time.”

Though the words might be Daly’s, Smith found that particular song to resonate quite strongly with him as well.

“There was a night where during ‘Dance On Our Graves,’ it got kind of embarrassingly personal on stage,” he says. “It was just powerful, which I think is a sign of a song working.”

That’s why Paper Route might actually be the band to successfully disprove all those aforementioned stereotypes. They have the fabled understanding of what authenticity is and that it goes far beyond just how they play their instruments.

“I want something real. It can be the most painful, depressing, dark thing ever, but I see a sense of hope in the center of that. That’s what I search for in art. I’ve never been more encouraged than by a song that was just completely honest, and when that lyric matches the melody, you hit that special moment,” says Smith. “Everything else is just a matter of taste.”