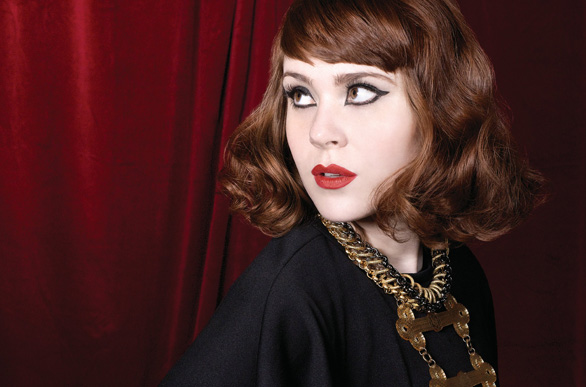 Kate Nash is your Best Friend.

British singer Kate Nash has announced the impending release of her sophomore album, and you’ll be pleased to know that it is entitled My Best Friend Is You. Former Suede guitarist Bernard Butler produced the album for Nash, who has spent the time between albums selling a million records, winning a Brit Award, the Vodafone Music Award and trophies from Q Magazine, NME and the U.K. VMAs.

My Best Friend Is You drops April 20, but you can view the video for the first single “Do Wah Doo” now at katenash.co.uk. And since Kate considers you her best friend, you’ll probably want to be supportive and cheer like mad when she plays at the El Rey May 11.

There aren’t many things scarier to a singer than facing the prospect of having throat surgery, but an operation is not necessarily a career-ending event as Paul Curreri has proven. The folksinger-songwriter was out of action for 15 months after enduring major throat surgery, but he’s bounced back fully and is about to release a new album entitled California.

“Oh man, here and there, all this forced time off whirl-winded me,” says Curreri. “But we all live with hardship and crisis, and I realized certain junk isn’t permanently within me, that there’s peace to be found relatively close by and that some degree of grace is attainable.”

The album’s title cut is not so much about the Golden State as it is about the inner quest for happiness, something Curreri has attained by staying busy riding his motorcycle, venturing to Kenya and producing albums for various acts, including his wife Devon Sproule. California drops April 27 and U.S. tour dates will be announced after Curreri completes his current European tour.

Earn it Yourself Returns to Warped Tour

Earnityourself.com has announced that they will once again be giving local bands a chance to perform on the Kevin Says Stage during this year’s Warped Tour. Bands interested in applying need to visit earnityourself.com/kevinsaysstage for information on how to submit for the Earn it Yourself spot at their local Warped Tour date.

Earn it Yourself is looking for bands that have strong roots in their communities, well-developed business plans and a reputation for working hard, having a strong following and putting on a good live show. Bands need to build a thorough profile that demonstrates what they’re doing, and to that end, the competition Web site offers myriad tools like “scene calendar,” “venue database” and “EIYpedia” to help things along. EIY’s Sarah Saturday and Warped Tour founder Kevin Lyman personally choose the winners.

Bands from all over the world are being invited to enter the Briggs & Stratton Battle of the Bands for a chance to play at Milwaukee’s Summerfest, the world’s largest music festival. The grand prize-winning band has the opportunity to open for a top headlining musical act at Summerfest on the Briggs & Stratton Big Backyard stage June 26. Last year’s winning act, the Run Around, got to open for Blues Traveler.

The outcome of this year’s contest will be announced on May 25 and determined by online fan voting. Contestants need to register and upload their music at briggsbattleofthebands.com no later than April 16.

Here’s yet another chance for musicians to garner national attention by entering the Ernie Ball Play Crossroads contest. The winning artist or band receives roundtrip airfare to Chicago, hotel and a 30-minute performance slot on the Ernie Ball Village Stage at the Crossroads Guitar Festival June 26.

The Crossroads Festival is a one-day benefit show for Eric Clapton’s Crossroads Centre, a substance abuse clinic on the Caribbean island of Antigua. Confirmed acts at this year’s festival include Eric Clapton, John Mayer, ZZ Top, Vince Gill, B.B. King, Buddy Guy, Jeff Beck, the Allman Brothers and many others.

Applicants need to create a profile and upload MP3s and photos at playcrossroads.com. The winner also gets a full Ernie Ball Music Man endorsement, prizes from the Guitar Center and a feature in Premier Guitar Magazine.