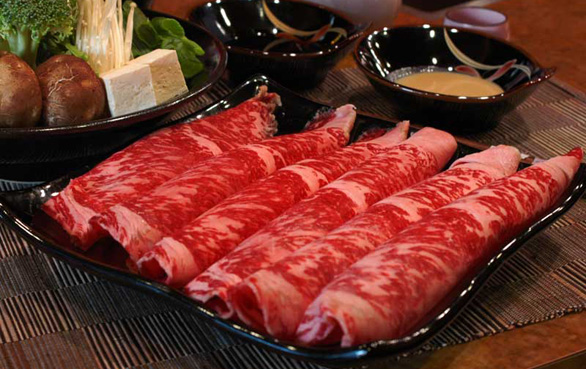 Driving down Olympic Boulevard earlier this year, I saw a “Coming Soon” sign for a corner restaurant that was all things Japanese fondue. I’ve heard of Shabu-Shabu, the art of boiling meats and vegetables, or Sukiyaki, where you dip said proteins in egg before dropping them into the flavored hot pot. But after dining at Yojie, downtown’s newest Asian eatery, I realized that fondue is a fancy word to describe Shabu-Shabu and Sukiyaki. The concept restaurant offers both styles of cooking, as well as traditional fondue by way of dessert.

The atmosphere is quite lively, mostly comprised of groups of students from nearby FIDM or L.A. Live visitors. The sleek interior looks nothing like the hole in the wall shops in the Little Tokyo section of downtown and, of course, the prices reflect that.

Another part of the Yojie concept is the premium sake bar with options ranging from 30 percent rice polished Honjozo to 50 percent Junmai-Daiginjo. I opted for the highly polished rice-infused Yumetsukito that had a mildly flowerlike aroma and was very smooth to digest.

Seeing as Yojie is all about the sake, I figured I’d stick to that theme and decided on a sake cocktail as well. The Paradise Island, with tropical guava and mint-infused sake, is arguably the best out of the 10 signature drinks. I was a little offended with the Rice Rocket drink, but hey, if you like the taste of Red Bull with your sake, by all means order it.

The appetizers include your standard edamame, green salad with sesame dressing and miso soup. The carpaccio with a trio of fresh seafood and Kobe beef is pretty good, but at $20, it’s more expensive than most things on the menu.

Moving on to the “swish-swish” Shabu-Shabu dishes, you get a generous assortment of fresh veggies, udon and harusame noodles, tofu, Japanese mushrooms and seaweed. Free refills of rice (Brown rice is served, too.), are offered, along with sesame seed sauce and my favorite, citrus ponzu.

I especially enjoyed the marbling on the Samurai, eight ounces of certified Angus beef, thinly sliced and colorful. The Seafood Delight was also presented with five different types of fish, including scallops and ahi tuna. For the vegetarians, Napa cabbage with an assortment of Japanese mushrooms, leeks and noodles didn’t seem like you were eating rabbit food. It was nice and hearty!

The “grill-on-sauce” Sukiyaki portion of the menu offers the same choices of proteins, seafood, beef, chicken and combos, but your food comes with an egg for dipping before putting it in the warishita, a slightly sweet broth made with sugar, soy sauce and salt. The difference between the Sukiyaki and Shabu-Shabu is literally, would you like a slightly sweet or savory experience? Either way, they’re both bursting with flavor.

The dessert keeps with the “theme” with a green tea-infused chocolate concoction. The choices are plentiful with marshmallow, pound cake, cheesecake and the always-reliable strawberries. Or you can opt for a red bean mochi, among other flavors.

I tried the lychee ramune float. Ramune is Japan’s answer to the carbonated soft drinks we love to consume; add some ice cream and you have the Japanese float! I’m not sure why Banana Foster is conspicuously on the menu, but I hardly ever see it anywhere, so it was kind of nice to see the flambéed dish.

There is a promotion for bottomless Sake Sangria on Sundays that I’ll have to revisit, as I am all about bottomless everything. But until then, I’ll probably stick to going to Yojie for lunch to avoid the crowds.

All in all, Yojie is one of those places to either go on a first date or a weekend night with a group of friends. But be sure to make reservations!