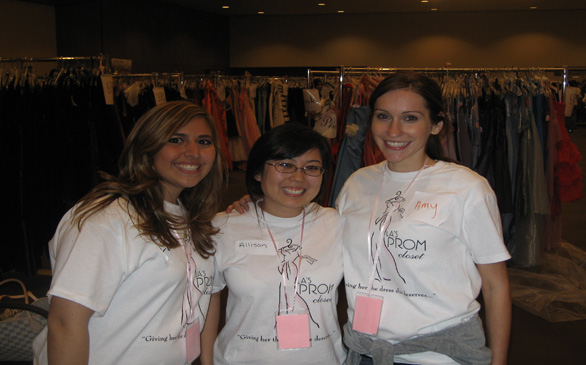 People often tend to focus on a destination rather than the journey and believe that we are limited in our capacity to help others make their dreams come true. However, one group of women I had the opportunity to work with during the last three months showed me how the stops along the path can shape us and are as crucial as the arrival itself.

As a soon-to-be graduate of California State University, Northridge, I have come to the realization that many people write off college students as unable or unwilling to give back to their communities. With my full course load as a public relations major, an internship at NBC and a part-time job as a waitress, it is easy to see why I would not be able to add volunteering to my long list of activities.

During my last semester at CSUN, my senior project provided me with a chance to gain practical experience in public relations and also give back to those in need. In teams of three, students were asked to locate a local non-profit and provide them with our public relations expertise.

After weeks of searching, my team found a great organization run entirely by volunteers. We decided to work with LA’s Prom Closet, a Los Angeles-based non-profit that provides new and used formal dresses to high school seniors experiencing financial hardships. As a group of three young women, not far out of high school ourselves, we saw this as an opportunity to help girls achieve their dreams by using our own life experiences.

In 2008, president and founder Natalie Torres realized the importance of taking small steps to reach a greater goal. Three years later, young women from more than 70 schools across Los Angeles are being referred to receive help in making their prom dreams a reality. What stands out the most about this organization is that it extends beyond a dress giveaway and encourages young women to succeed despite limitations in their lives.

Initially, we took on the responsibility of simply raising awareness of the LA’s Prom Closet third annual “Dress to Remember” event in order to bring in more dresses, volunteers and financial donations. After a lot of hard work and perseverance, KIIS FM’s Community Council Program featured LA’s Prom Closet for a 30-minute on-air interview.

An outpouring of support began in the Los Angeles community as people came to us with donations, both big and small, and offers to volunteer at our March 27 event. We even scored a beautiful gown donated by Fergie, the female vocalist of the Black Eyed Peas. Weeks before the event we reached maximum capacity for volunteers and received 2,000-plus dresses for more than 240 girls to choose from, far surpassing last year’s numbers.

Although my teammates and I had completed our jobs in the public relations department, we were eager to continue helping the organization and volunteered as personal shoppers the day of the event. We reminisced about how special our own proms were and hoped to bring the same level of excitement to the young women walking through the doors that day. Some entered shy and nervous, others boisterous, but they shared a common trait – each had a sparkle in her eye and an undeniable enthusiasm for the ‘big day.’

An idea is nothing without people there to bring it to life. LA’s Prom Closet could not have become an actuality without the help of dozens of volunteers across the community. What began as a class project turned out to be an eye-opening experience for me. Every volunteer, from the huge corporate sponsor to the individual college student, can make a difference. There is no greater satisfaction than helping someone in need for a moment and inspiring them for a lifetime.