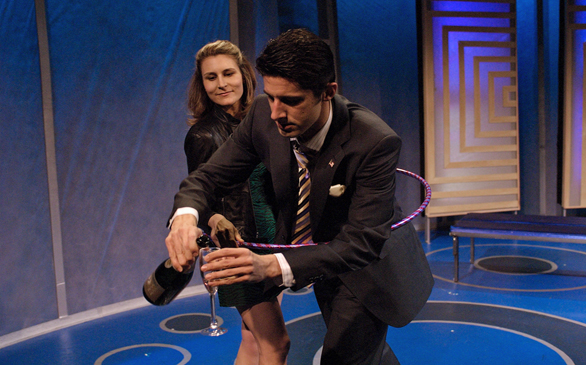 “The Blue Room” will give you a hard-on, make you sweat or both. Written by David Hare, the play is based on the controversial book Reigen by Austrian writer Arthur Schnitzler.

This adaptation, directed by Elina de Santos, is wonderfully uninhibited, taking on a very modern approach. I love the small screen she includes above the stage that references how long each sexual encounter lasts. Some last “one minute,” while another is close to “two and a half hours.” The passion between each character is undeniable.

Still, I feel Dow could have given more (and by more, I do not mean nudity). She plays it safe and could let herself go a bit more. Anderson, on the other hand, gives wonderful versatility.

Sound designer Christopher Moscatiello and Arthur Loves Plastic’s original music has sex written all over it. It is perfect for the mood.

Although we have become more tolerant of sexual expression in our society, I can see how Schnitzler encountered tremendous scrutiny when his book went public. It was first published in Vienna in 1903, only to be censored a year later. He was terribly criticized, often called a Jewish pornographer as well as other horrific anti-Semitic remarks. He was a visionary, a man way before his time.

He said it himself: “I write of love and death. What other subjects are there?”