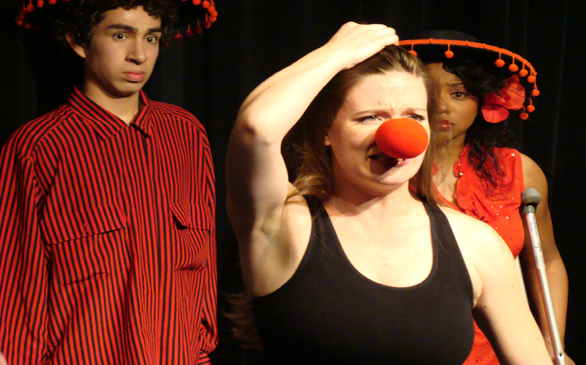 One of the most iconic sitcoms of the ’90s, “Saved by the Bell,” has a new life outside of syndication: on stage at the Whitefire Theatre in Sherman Oaks. Written and directed by Ren Casey, who also plays AC Slater, the parody seeks not only to pay homage to the show by increasing its cheesiness to the nth degree, but it compels you to laugh the entire time.

The idea to create a musical came to Casey while he was in high school. It took him more than a decade to bring his vision to life, and the show is now in its sixth production. It has played to many sold-out audiences in New York and Los Angeles.

The play follows the gang through their hijinks as they scramble to find the money to repair Mr. Belding’s car after they wrecked it while out joyriding. It mocks such memorable episodes like, “Cream for a Day” when Kelly (Kelly Tighe) gets a zit and “Pipe Dreams” when the gang realizes there is an oil well underneath Bayside High.

Throughout the hourlong play, it’s nearly impossible to find a moment to rest your diaphragm from all the laughing. From Zack (Stephen Steelman) telling Jesse (Jennifer Bainbridge), “I don’t know how to dance, and you’re practically a showgirl!” to all the nine songs the gang sings intermittently, there’s hardly ever a break in the action.

More astounding than Luke Barnett playing “Everyone Else,” which is actually 10 characters, including Cal Weathers the oil tycoon who wants to drill Bayside High, is the cast’s impeccable ability to go through multiple dress changes – in the same scene – without missing a beat.

The show is a bit pricey ($20), but it’s well worth every penny. It runs Saturdays at 10:45 p.m. For now, the shows are scheduled to run through May 31, but if it keeps gaining in popularity, it will be extended through the summer.

Comedy
Impractical Jokers aka The Tenderloins, Serving Comedy Up "Well Done": Live at The Grove of Anaheim (1/17)
5,051 views