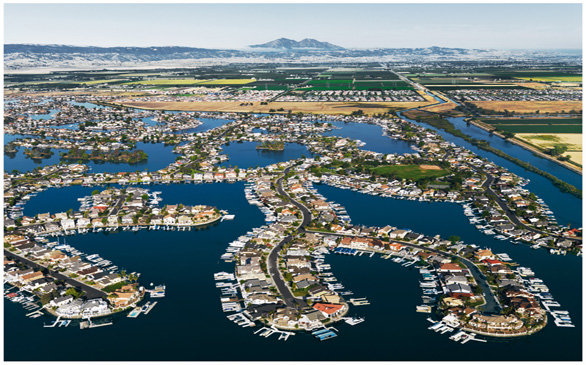 Edward Burtynsky: "Calif. is a plumbing project; it is returning to its original state - a desert.
(Credit: Edward Burtynsky, Freelance; from National Geographic's April 2010 Issue)

Approximately 70 percent of an adult’s body is made of water. About that same percentage covers the Earth’s surface. These and other random water facts have been made standard trivia points for know-it-alls since the creation of the H2O molecule – or so it seems. However, how often does one stop to think about the story of how water affects our personal lives, our religions, our beliefs and our way of life?

The Annenberg Space for Photography in partnership with National Geographic Magazine presents Water: Our Thirsty World, a multimedia exhibit that examines the precarious state of the world’s fresh water. A series of images, videos, workshops and presentations showcase six major features of National Geographic’s April 2010 issue by the same name as the exhibit. The themes include “Sacred Waters,” “The Big Melt,” “Parting the Waters,” “The Burden of Thirst” and “California’s Pipe Dream.”

National Geographic’s renowned photographers each try to tell a story with their images.

And they tried to lift that content off the page of the magazine.

Lynn Johnson, photographer of “The Burden of Thirst” captures the struggles of women in third world countries who travel long journeys three times a day to bring clean water back to their home; the modern-day water slaves.

Johnson states, “People will not save what they don’t know about.”

With this photojournalistic collaboration, Johnson hopes to raise awareness about the burden of thirst that these women carry on their shoulders.

Photographer Joel Sartore empathizes with Johnson on bringing awareness to these issues. Sartore photographed “Silent Streams,” bringing attention to endangered freshwater species that are losing their habitat due to degradation. One of the most attention-grabbing photos is that of a turtle that looks like it is smiling.

Sartore mentions that it’s easy to get people to care when other people or cute animals are the subject, but he notes with an air of good-humored frustration, “It’s difficult to take a sexy picture of a mussel.”

As difficult as that might be, his work displays his true talent and captures the story of underwater life.

One exhibit that should raise interest of Angelenos is “California Pipe Dream,” photographed by Edward Burtynsky. It captures California’s water delivery system, one of the most elaborate in the world, and how a three-year drought forces alterations in living styles for many residents. Author Joel K. Bourne, Jr. writes how this crisis came to be, how to fix it and, most importantly, how to adapt to it. Burtynsky states, “California is a plumbing project; it is returning to its original state – a desert.”

Images bring light to the wary truth that we live in; Los Angeles is a desert that was populated and urbanized against nature’s will. The infamous Los Angeles River makes an appearance in the photography, along with the history of its legacy and the present state of embarrassment that it is today.

The Annenberg Space for Photography had its first anniversary on March 24, the day Water opened. Since opening a year ago, the space has displayed thousands of photos, both print and digital.

Wallis Annenberg, president and CEO of the Annenberg Foundation, says, “We see the creation of the Annenberg Space for Photography as a service to the community where visitors can see the world through a different lens and leave feeling motivated to make positive change.”

After seeing the Water exhibit, it is guaranteed that you will feel and look differently at water. It is no longer just three atoms in a molecule, or what you chug to avoid a hangover, it is a story of life – and you’ll be inspired to care about it, even if a mussel isn’t sexy.

Annenberg Space for Photography is located at 2000 Avenue of the Stars, Century City. For more information, visit annenbergspaceforphotography.org.