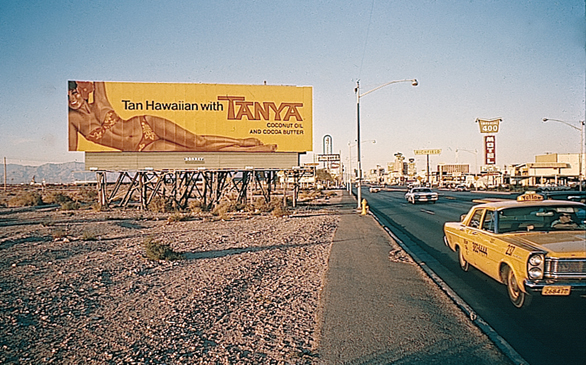 They say what happens in Vegas stays in Vegas, unless, of course, the photographic images of Sin City are captured and compiled by a pair of architects and a group of students more than four decades ago and then aptly placed on display at the MOCA Pacific Design Center.

Las Vegas Studio: Images from the Archives of Robert Venturi and Denise Scott Brown delves into the personality of a city that once was.

But instead of presenting the debauchery and all things that give Las Vegas its “Sin City” moniker, MOCA presents images from Venturi’s and Brown’s collection of “Original Photographs and Film of Las Vegas Strip from Landmark Architectural Study.”

The “architectural study” was part of a unique field trip to the desert city in 1968, with Venturi and Brown taking a handful of cameras and Yale students to Las Vegas that year to capture the images of the many building façades in and around the famed Strip.

Published in a book entitled Learning From Las Vegas four years later, the compilation of photographs was considered by many as groundbreaking and revolutionary as it portrayed Las Vegas in the bigger light of post-World War II architecture. Specifically, the photos were meant to portray Las Vegas as a microcosm of how the United States developed after 1945, not only architecturally but pop culturally.

Yet, what MOCA curator Philipp Kaiser is trying to achieve with this current exhibit is to display what Venturi, Brown and their clan of Ivy League students kept out of the book – a series of photographs deviating from the neon signs and the Sin City lifestyle and instead focusing on how Las Vegas tried to create an identity beyond the Strip.

Just how did the groundbreaking visionaries capture the true essence of Las Vegas beyond what many perceive to merely be a city of lost fortunes and disappearing lives? Easy – Brown and Venturi essayed Las Vegas through its car culture and its horizontal suburban sprawl.

Fitting, as the advent of the car culture and mass expansion of suburbia across a horizontal desert floor is a phenomenon of postwar America. With Las Vegas officially the largest city in the United States founded in the 20th century, no other metropolis in the country could hold a match to Sin City in accurately representing the gritty truth of American pop culture and urban growth after World War II.

It is with these pictures that the genius of Brown and Venturi becomes evident. They did not limit their interpretation of Las Vegas to the confines of the Strip. The exhibition is more than casinos, neon lights, hotel rooms, nightclubs and open desert.

Instead, Venturi and Brown captured Las Vegas, the actual city beyond the Strip, at face value. Sure, it is impossible to separate the Strip from Las Vegas, but there is still a life independent of all the bright lights, gambling, shows and tourists.

As a whole, the MOCA exhibition captures the human element of what makes up Las Vegas. That humanity is evident at the onset of the display, what with Brown and Venturi depicted in separate photographs but collectively framed in a perspective that gives the viewer the idea that Las Vegas is a small town home to people who have large misperceptions of who they are – perhaps a moral that is itself not too different from postwar America.

There are many photographs in the exhibit representing the ideal of outside-looking-in, kind of representative of how most of the world sees this small town, which blossomed from nothing to something in no time flat – mostly because the city is almost entirely devoid of native populations.

Ultimately, the MOCA exhibition of Brown and Venturi’s photographs of old Las Vegas demonstrates an intricate balance of accelerated postwar growth and a sense of attempted normalcy in the shadows of egregiously impulsive behavior.

Perhaps the only weakness of the Las Vegas Studio is that it is in such a small space – there is no way the Pacific Design Center will ever have enough real estate to give Brown and Venturi proper justice to share with Angelenos how Las Vegas is a microcosm of postwar American development.