The Perfect Game: Little giants claim their piece of history. 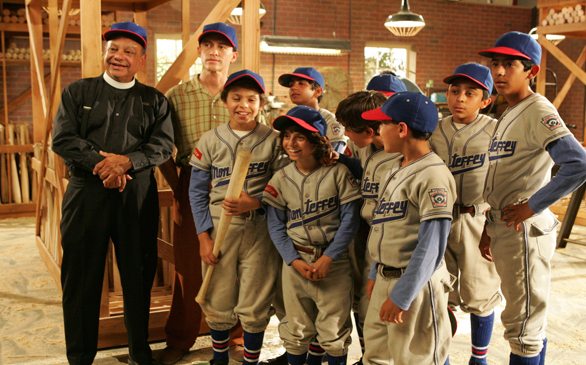 We have all sat inside a movie theater and watched a series of previews, only to see one film advertised with the cliché introduction, “Every once in a while a story comes along …” Relying on sympathy and emotion to sell what is meant to be a film about the triumph of human spirit over obstacles, these films promising audiences an “every once in a while” type of story usually fall short of living up to the hype.

Then again, every once in a while, a story comes along that is worthy of having the aforementioned cliché introduction. That story is The Perfect Game.

A triumphant story written by former Wall Street executive W. William Winokur and directed by veteran filmmaker William Dear, The Perfect Game does what every film of its type should do: transport audiences to a whole new world where wholesome storytelling rules the day and positivism triumphs over all.

For a group of pre-teen boys in Monterrey known as “los pequeños gigantes (the little giants),” all they dreamed of was to play one Little League game in the United States. That dream turned into a magical run for the boys as they ran through the competition and were the first team outside the United States to win the Little League World Series.

Coached by Cesar Fez (Collins Jr.) and led by feisty pitcher Angel Macias (Austin), the little giants claimed their piece of history on Aug. 23, 1957, when the Monterrey Little League squad defeated California’s La Mesa, 4-0, in front of 10,000 fans in Williamsport, Pa. In that game, Macias became the first (and only) player to pitch a perfect game in a Little League World Series final.

Yet, The Perfect Game is less about Macias’ magical performance and more about the journey both him and Fez embark upon with the rest of Monterrey’s Little League baseball team from a poor industrial town in the Mexican desert to the perfectly kept baseball fields in the United States. For a few of the actors, the story behind The Perfect Game is even simpler, albeit just as important as a group of underdogs chasing a near-impossible dream.

“Every underdog has dreams, and they have those dreams regardless of race,” Collins Jr. tells Campus Circle during a recent interview at the Grove. “The success of any underdog is the success for everybody that tried to be something even if the odds seemed to be against them. So it’s a universal dream. It’s not just for Latinos. It’s for everyone.”

Before anyone points out that underdog stories are cliché, the film’s writer is quick to point out the deeper meaning of The Perfect Game.

“It’s a period piece. It’s more than about Mexico, but more about what was the world like in 1957, not only in Monterrey, but in Texas, in Kentucky and in Pennsylvania,” Winokur says. “In this story, you had a group of kids who had nothing but faith, nothing materially and nothing but a desire to play baseball. The star of this movie is the story. We wanted people to say, ‘Hey, look at those kids.’”

Indeed, look at those kids. About a dozen kids are featured in the film, bringing to life on the big screen the true stories of the unlikeliest of heroes hailing from a city most Americans would not be able to find on a map.

It was those kids – the real ones in 1957 – who overcame some of the biggest obstacles in claiming victory in Williamsport, all because they had a dream of merely playing a friendly game of baseball, irrespective of result, in a small Texas town that summer. Among those obstacles the Monterrey kids had to overcome included family woes at home, lack of experience on the field and racial friction in the United States.

“There are certain aspects of the story that are a metaphor to my life, like family issues, I can relate to,” Austin says.

Marin echoes similar sentiments, adding that Austin, Arias and the rest of the child actors portraying the first-ever Monterrey Little League team do an amazing job in telling a tale of what their real-life counterparts endured more than 50 years ago.

“Look at what these kids started,” Marin says. “This was the first year they had Little League in Monterrey. They had nothing. It was a long shot for them to win. But they did it. It shows you can achieve anything if you dream.”

It is a story of dream that Winokur hopes would resonate with audiences, mostly because he left his posh job in an ivory tower on Wall Street to pursue a more fulfilling career as a storyteller who could positively affect the lives of the everyday human.

“I had stories I wanted to tell. I wanted to make a difference and tell stories that would touch people’s lives,” Winokur says.

Of course, it is not hard to touch the lives of many with the true story of The Perfect Game. Winokur presents a tale that just about anyone would root for. After all, how does one not feel touched by a group of kids whose only weapons against a world ruthlessly opposed to their goals are a small dose of dreaming and a whole lot of heart?

It is a rhetorical question Marin aptly answers as he calls upon his own experiences playing Little League baseball in Granada Hills in the same year the Monterrey team was devouring opponents on its way to Williamsport.

“The thing that works in the end is that this is a true story. This is not made up,” Marin, who plays a priest in the film, says. “I was in Little League when this happened. I was exactly the same age as these kids, and I looked like them. I was little, and I was round. I really identified [with the Monterrey team]. I knew this story very intimately. It was big news back then, and I followed it.”

Playing Macias’ father in the film, Gomez echoes Marin’s thoughts. In speaking about how The Perfect Game aptly depicts the triumph of the Monterrey Little Leaguers, Gomez point out that the film is also about genuine storytelling and wholesome entertainment.

“I think audiences will be surprised this is a true story. It’s not fictional, this really happened – I think that will resonate with audiences,” he says. “It’s also a throwback to what movies should be about. There are no games, no blood. It’s a family movie. It’s really a positive movie for Mexicans. We’ve been getting a bad rap recently. For it to be a true story about kids and a dream, I think it will put Latinos in a good light.”

Of course, everyone on set realized they were also telling the tale of how Monterrey put hopes, dreams and humanity in a good light.

To that end, everyone involved with the film mentions how much pride they took in going to set everyday and giving it their all in order to do justice on screen to the real kids who put it all on the line just to have the opportunity to merely play one game of baseball in the United States. Accordingly, The Perfect Game was a bridge between the kids who re-enacted a series of Little League games, the kids who actually played those very same games and the city of Monterrey.

“We were very proud [of the film] because it was for Monterrey,” Arias excitedly says. “There were so many people out there rooting for us. We felt like the Beatles.”

It is not clear whether the actual Monterrey Little Leaguers felt like they were the Beatles in 1957, despite the team’s post-championship itinerary that included trips to the White House to meet President Dwight D. Eisenhower shortly after hanging out with Jackie Robinson’s Brooklyn Dodgers at Ebbets Field. Still, there was no need for either the real Monterrey Little Leaguers or the kids who played them on the big screen to try to imitate one of the greatest rock bands to grace the Earth.

Instead, all these kids ever have to do is be true to who they are, as they are rock stars for sharing with the world that dreams do come true with faith and perseverance.