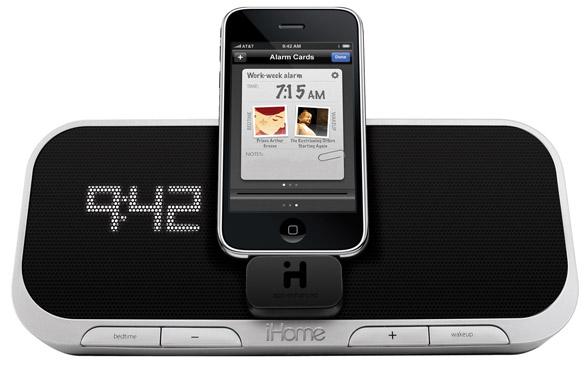 If there has been any notable side effect of the tech-friendliness that our modern society has adopted, it has to be the emergence of a vibrant accessories market. While the idea of a mobile phone or a next generation gaming console may have once been the big news, it almost feels wrong not to purchase some cool, custom-fitted sticker or battery-enhancing plug-in to accompany it. In this accessory-loving reality, no truly worthwhile piece of technology can reach its full potential without a case, some battery packs or any of an ever-widening range of add-ons and decorative touches that are available at your local electronics store, game shop or mall kiosk. Perhaps no gadgets have been more embraced by this trend than the iPod and iPhone.

Unfortunately, it doesn’t take much to make an iPod/iPhone accessory. The market is flooded from all directions by silicon sleeves, rhinestones and other cheap peripheral products aimed at the trendsetters and the trend-followers. This isn’t to say that there aren’t tons of cool, unique accessories out there for your iItem of choice, but sometimes it is hard to tell the innovative from the flashy and, ultimately, useless.

Of the many iProduct companies, iHome has a reputation for consistently putting out strong products. They seem to always come up with a number of unique accessories that not only add functionality and style to the iPod family, but also offer new ways to enjoy the range of unique functionality that the Apple products offer. From the color-changing accents of the iH15W to the iP41’s ability to switch from portrait to landscape mode to compliment the iPhone’s video capabilities, the iHome line has consistently found new ways of looking at these MP3 players.

For all of their previous successes, though, the iHome iA5 is one of the most ambitious. This combination charger, speaker and alarm clock is the first of the manufacturer’s products to feature app-enhanced functionality. This means that when coupled with iHome’s own free iHome+Sleep app from the Apple App Store, the alarm clock can do far more than any regular iPod-powered alarm.

Since iHome+Sleep is intended to work with an alarm clock, it stands to reason that some of the coolest features of the app involve creating alarms. Rather than simply setting a standard wake-up time, iHome+Sleep allows you to create multiple Sleep Cards. These cards act as self-contained alarms that not only contain the wake-up time, but also the days of the week when the alarm should be played, a list of songs you would want to wake up to and even how long the alarm should wait when you press the snooze button.

In addition to the alarm, iHome+Sleep offers some very useful tools. You can track the times when you set the clock to “Bedtime” mode and when you wake up. If you are a real social animal, you can even have the app automatically update your bedtime and wake-up times on Twitter and Facebook. Perhaps the most useful tool, however, is a localized weather station that should help take the guesswork out of what to wear in the morning.

Upon docking an iPod Touch or iPhone with the iHome+Sleep app running, the user can immediately set a number of clock preferences. The app controls everything from the iA5’s bass and treble to the clock’s brightness. You can even automatically set the clock’s time to sync with the iPod’s clock.

The iA5 itself is a truly nice device. The sound quality is clear, it can charge any iPod product and it even has a line-in for other MP3 players. The characters on the display are large, and the reliance on the app to fine-tune the playback means the iA5 isn’t cluttered with a wide variety of buttons.

Admittedly, there are a few small issues with the app-enhanced wonder. First of all, you do need the app to really get the finer points of the device. The connection point is a bit slim, giving the feeling that something could break if the iPod isn’t perfectly placed onto it. At times, a poor connection can mean that the speakers don’t kick in, but that can easily be fixed by unplugging and plugging the iPod back onto its base. It would also have been nice if the base could have swiveled to offer landscape mode, but that is a minor issue.

All in all, the iA5 is a successful merging of quality accessory design with interesting app integration.