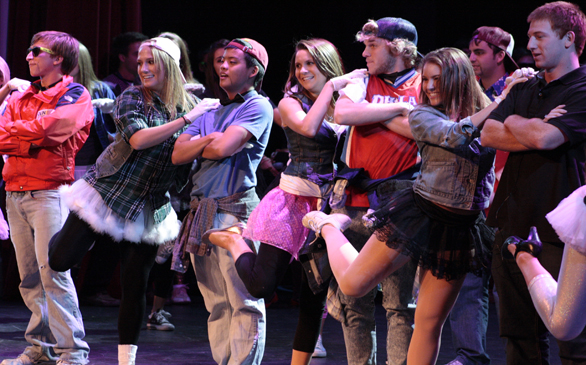 With great universities come great traditions. USC Songfest, one of the oldest and largest collegiate musical traditions in the country, is celebrating its 57th anniversary. On Friday at 7 p.m. in Bovard Auditorium, over 600 students will gather to raise money to benefit Troy Camp, USC’s most active and most diverse philanthropy.

Fully student-run and student-supported, Troy Camp was established in 1948 and is now a mentoring program that partners USC students with children from the surrounding South Central Los Angeles area for a yearlong program of monthly events. At the end of the year, the program culminates with a weeklong camp where children are given the special opportunity to be away from home, be under the stars and form connections with college students. This year’s Songfest will attempt to raise $40,000 to cover the expenses of the camp, which costs about $60,000 a week.

Songfest showcases USC’s top performers, with seven talent acts and 11 pairs of competing fraternities and sororities. Greek houses couple up and pay an entry fee in order present a five-minute musical skit involving USC and the year’s theme, “As Seen on TV.” The skits will then be judged and the winner scores yearlong bragging rights and a huge trophy.

“It’s really cool,” she says. “I’m really interested to see what they do this year since the theme is so vague, though they can do something really creative. Last year the one I remember the most was the group who did a step routine, and also whoever did the Cinderella story about a girl who met a guy at a Trojan football game and lost her shoe … somehow. It was cute.”

This year, two of the judges will be Rory Felton (owner of the Militia Group record label) and Amber Stevens from “Greek.”