The Vacation: Get Back to the Roots of Rock ’n’ Roll 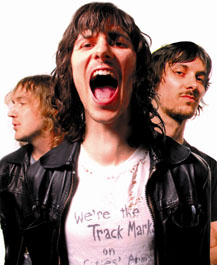 It’s dirty, it screams, it explodes, it smears you with libidinous excess – and, at the end of the set, it sprays you with some stray particles of cheap beer. On the streets of Silverlake and Hollywood, where dirt is an integral part of the atmosphere, The Vacation take the stage and plant three sticks of dynamite under the derriere of L.A. rock, clearing away once and for all the impression that pure rock ’n’ roll has its headstone chiseled here.

Brothers Ben and Steve Tegel are at the center of this Marshall-amplified demolition as the songwriting heart of The Vacation. The identical twins’ music is an intentional throwback to rock’s glory days.

"People gotta go back to the roots of rock ’n’ roll – when it was still fun," Ben explains, following up with an allusion to another dimension of their music. "We like stuff like the Sex Pistols; stuff with a social conscience. We try to carry on that."

If it’s difficult to believe that a band this raw and authentic comes from the manufactured streets of Los Angeles, could it be due to the fact that The Vacation is not native to our fair city?

"We’re from the Midwest ... ‘Suburbia U.S.A.’," Ben clarifies, "and [bassist, Dutch] is from New Jersey. I’ve always hated the suburbs and knew I’d wind up in New York or L.A. I just figured [L.A.] was a better place to start a rock band."

Apparently it has been; the band’s first EP, released in Britain on Fierce Panda records (Coldplay, Supergrass, Keane), along with their subsequent sonic drenching of audiences at the Reading and Leeds festivals, has paved the way for their work with producer Tony Hoffer (Beck, Supergrass) and their first full-length release, Band from World War Zero. And while they’re still not on a major label, the brothers express the same sentiment on the subject.

"Sometimes you get an A&R guy who likes music, but if he doesn’t hear a song that sounds like a single, he won’t sign you," explains Ben. "In a lot of ways, it’s better not to be on a major because we know a lot of bands that got screwed. It’s just not a priority for us."

What is a priority, however, is changing people’s minds about rock in L A. "We want to rep L.A.," Ben says with a laugh, explaining that perceptions have turned sour regarding the authenticity of rock in the City of Angels. "Everybody wants to put you in a category, but we try to be one category of rock ’n’ roll."

There’s no way anyone with working eyes and ears can arrive at another conclusion after seeing The Vacation play live. As Steve and Dutch detonate into "I’m No Good," Ben slithers around the stage in a lubricated Mick Jagger-esque swagger, letting the crowd know exactly where their roots lie. "I try to bring sarcasm and break down some walls. I need to connect with the crowd," Ben says of his live show philosophy.

At the end of the band’s set, it’s obvious they know how to rock. While the front row of the audience is wiping themselves clean, The Vacation is dirtying up, crunching the last bits of grit in their teeth, and figuring out how best to lose sleep until another Hollywood sunset lets out the tall shadows of rock ’n’ roll.

Band from World War Zero is currently available. The Vacation will be performing June 3 at Spaceland in Los Angeles, June 5 at the Anarchy Library in Downey and June 6 at Gallaghers in Huntington Beach. For more information, visit www.thevacationmusic.com.