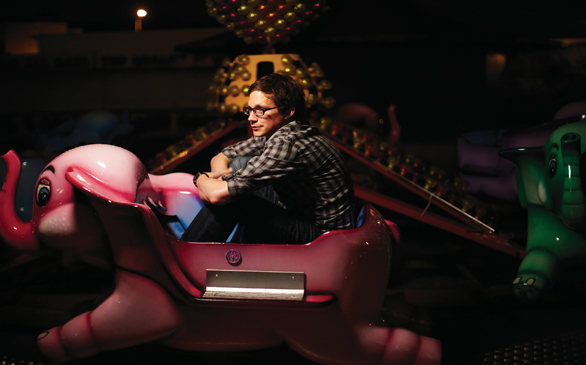 English band Aqualung are about to release their long-awaited Magnetic North album. Find your copy on April 27, and say hi to new Los Angeles resident Matt Hales when Aqualung plays the Bootleg Theater on April 26.

Everybody Was in the French Resistance…NOW!

The rather lengthy band named Everybody Was in The French Resistance…NOW! is your first clue that the minds of Eddie Argos (Art Brut) and Dyan Valdes, proprietors of said band, are not much for the mundane. The duo’s new album is called Fixin’ the Charts, Volume One because each song performed on it is an “answer” to a well-known hit where Eddie and Dyan “fix” what they perceive as an uncool situation presented in the original.

It was a cheating song, the Martha Reeves oldie “Jimmy Mack,” that inspired the concept, but Fixin’ the Charts, Volume One hits back at everything from Avril Lavigne’s “Girlfriend” to Frank Sinatra’s “My Way” with additional responses to songs by the likes of Kanye West, Gerry & the Pacemakers and even the Archies thrown in for good measure. Fixin’ the Charts, Volume One is out now on the Cooking Vinyl imprint, and Everybody Was in The French Resistance…NOW! brings their show to the Echo April 23.

Win an iPad From Band of Skulls

If you’re heading to Coachella this weekend you might want to take your camera. British act Band of Skulls is playing at the festival, and they want to give you a chance to win an iPad through the art of the photograph.

To enter, fans need to post photos of their favorite Coachella moments at sites like Flickr, Twitter, Photobucket or Facebook, tag them with “Band of Skulls” and “Coachella” and then visit bandofskulls.com/coachella to send the band a link to their photos and enter the contest. People Magazine named Band of Skulls’ debut, Baby Darling Doll Face Honey, one of the 10 best albums of 2009.

Saturday, April 17 is Record Store Day, and once again the celebration of independent record stores is marked by the release of dozens of limited edition vinyl pieces. Some of the goodies going on sale include seven-inch singles from Elvis Costello and Bruce Springsteen, a 10-inch picture disc from Them Crooked Vultures, 12-inch presses from Devo and Black Lips and a 7-inch box set of John Lennon material.

Other acts with special Record Store Day releases include Owl City, Goldfrapp, the Hold Steady, Neil Young, MGMT, Queens of the Stone Age, the Rolling Stones, Fan Farlo, Modest Mouse, TV on the Radio and many more. A cornucopia of in-store performances (including the Smashing Pumpkins at Space 15 Twenty) and autograph signing sessions are scheduled too; find the complete list of confirmed appearances at recordstoreday.com. And don’t worry about missing the fun while you’re at Coachella – just look for the Zia Records tent.

Garage rock bands overall may have a reputation for being slackers, but the label doesn’t fit local noisemakers Killola. The band are readying their third album, Let’s Get Associated, and have already unleashed the effort’s first single, “Cracks in the Armor.” They’re also producing and composing the music for Girltrash: All Night Long, an upcoming film written by Angela Robinson (“The L Word,” “Hung”).

Somehow they still have time to hit the road, and if you catch them on their Buy the Milk tour you can purchase the night’s performance on a USB flash drive right after the show (or have it sent directly to your mobile phone.) The very busy Killola plays the Roxy April 23.

Perry Farrell, Dave Navarro and Stephen Perkins have officially welcomed Duff McKagan (Guns N’ Roses, Velvet Revolver) to Jane’s Addiction as their new bassist. The band is now writing their next album, tentatively due out in the winter of 2011 on Capitol.

The news broke when Farrell and Navarro Tweeted a photo of the band at work in a Hollywood rehearsal space and directed fans to janesaddiction.org to see more pictures. The site overloaded and crashed several times, but fans should be able to smoothly access the gallery at this time.