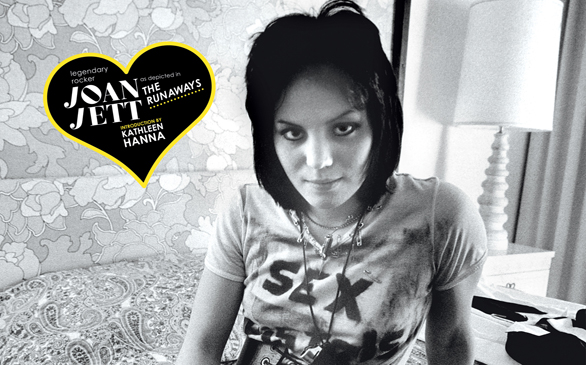 To see Joan Jett as just a raven-haired, leather jacket-wearing rock ’n’ roll beauty is just watching her from the surface. Taken at different angles, the singer who inspired the classic “I Love Rock ’n’ Roll” really was singing something near and dear to her heart.

Todd Oldham, author of Joan Jett, spent hours reviewing taped interviews of Jett – from her inception into the limelight with the Runaways – and eight hours of personal interviews with her today. It reads like a coffee table memoir, full of large vivid pictorials that tell their own story of a girl who just wanted to play her guitar. This is the real Joan Jett, away from the CD covers and music videos; what we see is a personal journey of what she represents for women musicians that is at the heart of Oldham’s book.

The public’s perception of Jett as a rebellious brooding teenager can be found in the recent The Runaways movie. But before she could travel the world singing “Cherry Bomb,” Jett lived a rather normal childhood.

Next to a collage of ’70s-style pictures painting Jett as a pensive good-natured young girl, Jett recalls her parents laying the foundation for her success. Her mother was even fine with Jett’s weekly traverse to a hip all-ages Los Angeles club, where she often took a bus from her family’s home in Woodland Hills to the only place she felt she belonged.

It is these opening pages that allow the reader to see a different side of the icon. At 15, she was already sporting her signature look with a Gibson Les Paul hanging low on her crotch. She wasn’t created to portray an image; this is who she really was.