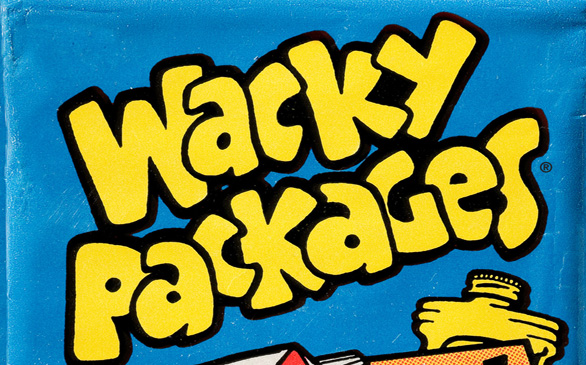 Growing up as a kid on the gritty streets of Encino, B.G.C. (Before Game Consoles), my days were spent riding my bike in the neighborhood, playing hide-and-seek and just hanging out with friends. A typical kid always looking for fun, collecting baseball cards became a true obsession. Then one day, when I was around 8 or 9, I came across a package of trading cards in the late ’70s that truly put a smile on my face. These trading cards released by the Topps Company, were actual stickers called “Wacky Packages” or “Wacky Packs” for the true collector.

What began in the late ’60s as a parody on popular consumer products, soon turned out to be one of the Topps Company’s biggest selling trading cards, at times, according to trader legend, outselling baseball cards. Kids across North America, myself included, were hooked on these hilarious spoofs of such products as Crest Toothpaste, better known in the Wacky world as “Crust” or Listerine, which became “Blisterine.”

Kim Deitch, George Evans, Drew Friedman, Bill Griffith, Jay Lynch, Norm Saunders, Art Spiegelman, Bhob Stewart and Tom Sutton were the creative geniuses behind the legendary madness of Wacky Packages. At the time, none of these amazing artists and comic writers had any idea of how well this line of crazy cards spoofing everyday products would become. To this day, Wacky Packages can be found at your local convenience store, and, though the cost-per-package has increased, the memories are priceless.

This new hard cover book displays Series 8 through 14 of Wacky Packages from 1974 and 1975. This second compilation is a collection of some classic mocking at the expense of such products as Cheer Laundry Detergent (“Cheep”), Coppertone Tanning Oil (“Suffertone”) and Clearasil (“Fearasil”). A delightful trip back to my youth and those carefree summers, I highly recommend picking up a copy, which comes with four limited edition stickers.