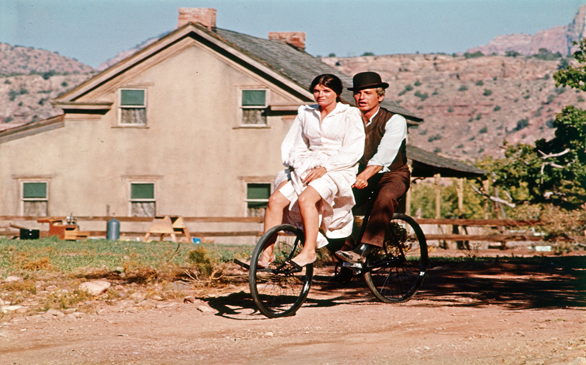 If you are one of my friends who actually reads my column, stop right now. I mean it. You will inevitably get annoyed with the film event I have chosen for this week because I talk about this film possibly more than any other. No, it’s not Mean Girls or Superbad or some other recent teenage phenomenon flick that is quoted ad nauseam by anyone who has a television or access to the Internet. This film stars the two original badass heartthrobs of Hollywood who brought new meaning to the term “daring duo” – Robert Redford and Paul Newman.

This movie was one of those films, if not the film, that made me love movies to begin with. Its premise revolves around the two gun-toting leaders of the Hole-in-the-Wall Gang and is set when the west was just becoming civilized. The men travel over mountains, through towns and across rivers, robbing trains and messing with a special posse that seems to always be on their trail. Technically, it’s based on historical characters, though I’m not sure how much is accurate. But you never know, they may have actually said, “Let’s go to Bolivia!” Or that could have been the genius of screenwriter William Goldman.

“I don’t know how much movies should entertain,” director David Fincher (Se7en, Fight Club) was once reported to have said about what movies he veers towards. “To me, I’m always interested in movies that scar. The thing I love about Jaws (1975) is the fact that I’ve never gone swimming in the ocean again.”

And this movie, if anything, leaves you scarred. It’s not like it hurts to watch. It doesn’t contain graphic material, depending on your definition of graphic, I suppose. What scars you is the feeling you are left with when the credits roll. More than anything, it leaves you wanting to see it again and again and again until all you can think about is the lovely scene on the bike through the meadow to “Raindrops Keep Fallin’ on My Head” by B.J. Thomas or the dramatic fight sequence or the love story or the undeniable charisma between the two male leads or the fact that one day you too need to visit the great canyons of the west just to jump into a gigantic stream while screaming profanities from several stories up on a rock cliff.

In any case, Butch (Newman) is all idea, and Sundance (Redford) is all action. Katharine Ross won the BAFTA Award for Best Actress as the woman who joins the daring duo on their transcontinental adventure. Care to take a gander at the film I have loved for most of my life starting in early childhood, the film that I force my uninterested friends to see because it is that damn good?

Butch Cassidy and the Sundance Kid (1969) isn’t some obscure, indie film. I realize that it is a beloved classic for many movie lovers. However, you would be surprised by how many people have not even heard of the film, let alone seen it. I’m sure studies would show that the majority of the general population is unknowingly missing out on one of the best moviegoing experiences of all time.

Lucky for those of you who make up this statistic, the kind people at the American Cinematheque are bringing it to the Aero Theatre in its original glory. My favorite western will be screened on April 16 at 7:30 p.m. alongside Tell Them Willie Boy Is Here (1969), which also stars Ross and was blacklisted filmmaker Abraham Polonsky’s return to the director’s chair after 21 years away. The film stars Robert Blake as a Native American man running from the law after he murders his lover’s father in self-defense. Our stud Redford is the sheriff who is heading up the hunt for the convict, and Ross plays the girlfriend Lola.

Katharine Ross will be present in between the screenings to discuss the films as well as to relay her experience starring alongside some of Hollywood’s biggest names in two not-to-be-missed blockbusters.

You’ll understand why I gush once you’ve experienced it as well.