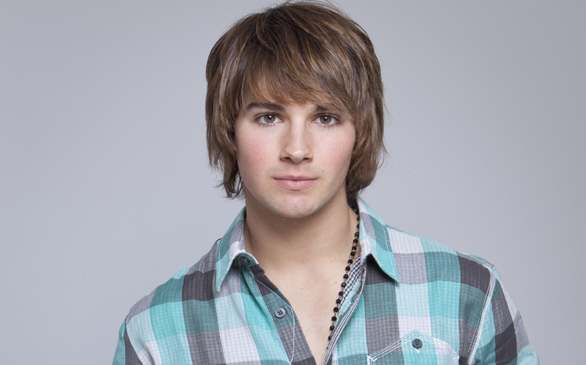 It’s 6:43 a.m. Do you know where your new favorite Nickelodeon star is?

If it’s James Maslow, star of “Big Time Rush,” Nick’s freshman hit series that earned the network its highest rating from a live-action debut during its premiere in January, he’s already hard at work. After just three months, “Big Time Rush” is a bona fide sensation, already renewed for a second season, with a soundtrack and the possibility of a concert tour, and that means Maslow regularly puts in 15-hour days, waking up for work when most guys his age are ending a night of shenanigans.

“Well, occasionally I’m doing both,” Maslow confides cheerily, “but I have to man up and grow up a little bit. Maybe when I get a hiatus I can go out late and have fun.”

Downtime seems unlikely for the 19-year-old star who is called on to sing, act, dance and play hockey on the show as James Diamond, one of four best friends and hockey players who move from Minnesota to Hollywood to become the next great boy band. It’s a role that took two years of strenuous auditions to land.

“They flew out 40 kids from across the country and put them up in a hotel,” Maslow explains. “They called it Boy Band Boot Camp. We had three hours of dance, three hours of singing, three hours of acting with a coach and they cut it from 40 kids to 30 to 20 to four. And then, a few months later, we’d do the entire thing again.”

Over the course of two years, Maslow endured no less than four trips from his home in San Diego to Los Angeles for another round of boot camp, making the cut every time against other boys from across the country. But he never knew if that meant he’d be on the show or back again a few months later for another run of the gauntlet.

“Many times I thought, ‘This isn’t going to happen,’” he laughs. “For the most part it was great, getting put up in hotels and competing against all these other kids, but six months into it, I was like, ‘Really?’”

But he says in the end it was worthwhile, especially now that the show is a massive hit for the network: “[Nickelodeon] set high expectations, however, we seem to have exceeded all of those so we’re very blessed, and I’m very lucky to be part of a project that did even better than they thought it would.”

It’s all a dream come true for the triple threat who began his career singing in “La Bohème” at the San Diego Opera as a child. But is he still capable of hitting those Pavarotti notes?

“I goof around with it every once in a while, but the way I sing these days is an entirely different type of training,” he says. “When I was little, I emulated some of my bigger, fatter friends and I thought it was amazing. I still have so much respect for [opera], but in some ways I may have ruined my opera voice because of the way I sing these days.”

Instead Maslow says he strives to be more like Stevie Wonder, Marvin Gaye and Donny Hathaway.

“I listen to them, how they sang, how they breathe. The modern-day version of Donny, I think, is Brian McKnight, beautiful voice. I also listen to Jack Johnson, John Mayer, an amazing guitarist and performer. I try to pull from a bunch of different genres.”

While work is Maslow’s focus and priority, he’s still a teenager. So what about the simpler, off-camera life he leads? I asked him where would someone find him at 10 p.m. on a Saturday?

“Provided I don’t have to work on Sunday, I’d go out and dance somewhere with a group of friends.”

When “Big Time Rush” is over, what other show would he most like to jump in to?

And, finally, what is the most embarrassing song he likes?