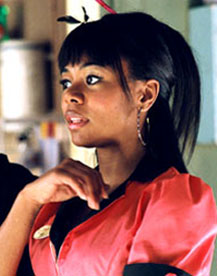 Born in Washington, D.C., Regina Hall made her initial splash on the movie scene by spoofing formulaic horror flicks as strong-willed Brenda Meeks in the 2000 hit comedy Scary Movie and its two sequels. The actress, who also held some prime-time television clout playing Corretta Lipp during the 2001-’02 season of Fox’s "Ally McBeal," returns to the big screen this summer as Trixie Norton in Sony’s modern-day update of The Honeymooners, which releases in theaters June 10.

In the film remake of Jackie Gleason’s classic sitcom, which stars Cedric the Entertainer, Gabrielle Union and Mike Epps, Hall’s character Trixie goes against the brash attitude of her in-your-face Scary Movie character. According to Hall, she had to refine her onscreen persona a bit in order to slip into her Honeymooners role.

"I definitely wanted to capture the spirit of [Joyce Randolph’s] Trixie. It’s a smaller part in the foursome, so I tried to capture who she was in that time that I had to portray her," says Hall. "I wanted her to be different than Alice (Union) and yet connected enough so that you could see why they would be friends in the first place."

Getting into character aside, it’s not lost on Hall that many people will rate the performance in the newer version based on the template originally set by Gleason and gang back in the 1950s. According to Hall, though, she’s ready for it.

"I know there are going to be comparisons [to Joyce]… anytime you do a remake of something that’s so iconic, you just have to be prepared [for the criticism]," she says.

Initially, "The Honeymooners" was a skit performed on Gleason’s infamous variety show. It became so popular that it was developed and made into a full-length television show. Unlike present day, where a show is not considered popular until its 100th episode is in the can, things were different in the days of the original "Honeymooners." In fact, only 39 installments of Gleason’s sitcom were shot and aired. The newer version, then, might help introduce the classic television characters to a whole new generation.

"I’d heard of [the original show] and had seen a few episodes on TV," Hall reflects, "[but] when I got the part, I bought all of the DVDs to watch. You can definitely see how ‘The Honeymooners’ set a lot of groundwork for future half-hour sitcoms."

After giving Gleason and company their props, Hall expounds on why she thinks the newer feature-length reprisal will work. "I just think the fact that we don’t have sex, we don’t have any violence and you can take your grandmother and your wife or your grandchild to see it – I hope that helps.

"I just hope that all the Star Wars people have gotten that out of their system," she jokes. "I was telling the studios, ‘Why don’t we just say Tyler Perry’s in it – that would guarantee us $22 million! But you can’t know," she says of trying to predict how well a film’s going to do, "it’s just one of those things."

The Honeymooners will be released during the summertime blockbuster crunch, so box office competition will be higher compared to a spring release. Hall unveils how she plans to augment the film’s ad campaign.

"I keep trying to start the rumor that I slept with Gabrielle (Union)," she laughs, "because she’s married and the movie’s going to be released the same day as Mr. and Mrs. Smith. So I’m hoping that maybe if I’m seeing Gabrielle or Cedric [in the tabloids], then maybe…"

The Honeymooners will release in theaters June 10.