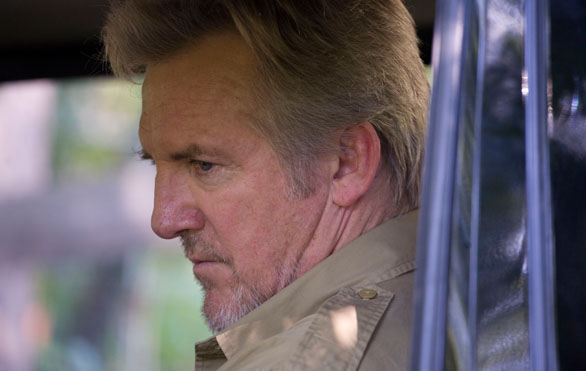 I had an initial prejudice about this film. Harry is, in fact, too handsome and charismatic. Men look up to him, and women want him. Actor Jamey Sheridan (Syriana), who plays Harry, gives off a Jeff Bridges vibe that is hard to shake. The man has a tall, broad build and kind eyes certain to make a presence anywhere he goes. Harry is a chameleon of emotions, which Sheridan plays with vulnerable sincerity.

Despite my prejudice of his handsome exterior, Harry is secretly introverted, showing moments of helplessness in his personal relationships. Forced to confront his shortcomings, Harry makes a promise to a dying old friend, Tom Kelley (Steve Buscemi), who asks Harry to seek forgiveness from Dave Kagan for an event Harry, Tom and their close friends committed while in the military.

Like Harry, it takes time for the film to get to a more profound place. The beginning plays off rather contrived with a feeling of predictability. But as we learn more about what happened to Kagan, tight strings start to unravel and we are left sifting through the clues of Harry’s past.

The movie operates like a slow pressure cooker, building upon Harry’s journey across the country to make sense of how one night continues to haunt those involved. Alternating between sudden flashbacks and vignettes of Harry’s encounters with old friends, the film gives the audience psychological clues to the mystery of Harry’s character. Sojourning across America we find what many of his old Navy pals have done to mask what happened to Kagan: Some refuse to acknowledge what happened, others used it as a catalyst for change, while still others let it fester inside. It is an event that leads Harry back to the source and to deal with Kagan directly.

The film plays like a detective story as it goes back and forth with brief flashbacks, so simple as an expression that it takes the whole film to make sense of the larger narrative.

A drama that unfolds between men is usually filled with male machismo and their relationships with women. This film ignores that and instead explores the emotional vulnerabilities of men. Younger generations may not have much interest in a drama involving old men like their fathers, but there is an essence to the film that speaks to anyone struggling with forgiveness – a topic that is astoundingly heartbreaking when the sin is so great.


Handsome Harry releases in select theaters April 16.
Article posted on 4/13/2010
This article has been viewed 1906 times.