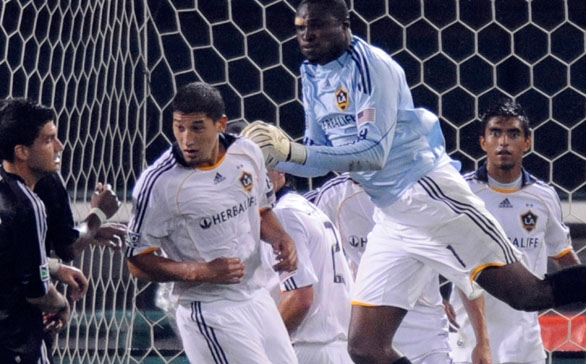 Forward Edson Buddle recorded two goals as the Los Angeles Galaxy defeated the Dynamo 2-0 in Houston on April 10. The match was the first on the road this season for the Galaxy, and the squad delivered a solid performance. They improved to 3-0, while Buddle collected his fourth and fifth scores of the campaign.

Buddle’s first score came in the 27th minute, as the Dynamo experienced a mental lapse on the defensive end. Miscommunication from two Houston defenders led Buddle to the ball before powering a low left-footed shot into the back of the net. Goalkeeper Pat Onstad was simply shocked by the goal, but Buddle was not.

A 2-0 advantage was attained one minute before halftime when Buddle posted his second goal after defender Sean Franklin sent in a cross. Franklin, who was key in the shutout, registered the assist.

Goalkeeper Donovan Ricketts and the remaining defense continued its above par performance. In three games thus far, they have not allowed a goal. Ricketts did not even have to make a save for the game.