Dum Dum Girls: I Will Be 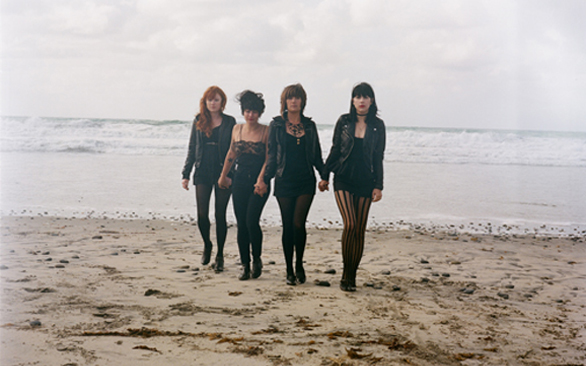 With a main base in Los Angeles, Dum Dum Girls exude a ’60s girl group vibe and style of sound, while at the same time bringing the sound up-to-date, upbeat and making it their own. There is also a bit of a garage feel to their sound as well, reminiscent of late-’70s bands.

Dum Dum Girls started off as a solo project with Dee Dee (Kristin Gundred, formerly of Grand Ole Party), on lead vocals and guitar. When it came time to expand the band, the additions of Jules on guitar and vocals, Bambi on bass and Frankie Rose on drums and vocals were set in place.

Signed to Sub Pop, their debut record, I Will Be, was produced by Dee Dee and Richard Gottehrer, who has worked with a plethora of bands including: Blondie, the Go-Gos, the Strangeloves and the Raveonettes.

I Will Be brings together layered harmonies and fuzzy tones with texturized pop edges. There is a contrast of happy-sad, light-dark within the themes of the record, effortlessly alternating and shifting, giving it a vivid, transparent quality. With 11 tracks clocking in at under 30 minutes, this is a record you’ll have on repeat.