The Losers: Zoë Saldana and co. win with action and wit. 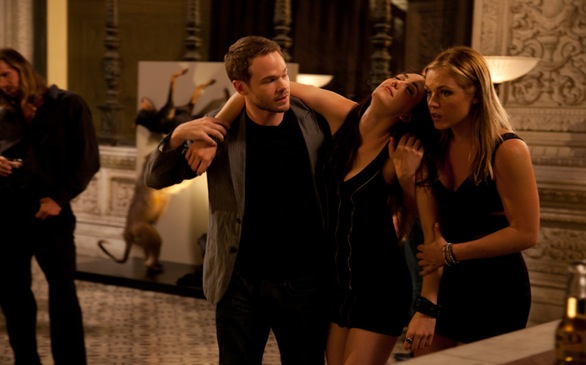 After the trailer for The Losers debuted at the end of January, it picked up a new title in certain circles: “The A-Team that isn’t going to suck.” Only time will tell which film is victorious at the box office, but rest assured, this summer promises to have to least one movie about a crack team of former government operatives who, finding themselves on the wrong side of the law, are forced on missions anyone else would see as suicidal while the government tries to put them away.

Based on the graphic novel of the same name, The Losers is “this amazing combination of really hard-hitting, visceral action combined with a collection of characters and humor in a unique way,” director Sylvain White (Stomp the Yard) says one drizzly morning at the Beverly Wilshire Hotel. “The aesthetic of the novel is really unique and very beautiful, the use of color, the graphic nature. I wanted to stay truthful to that on some level but make sure it’s not obtrusive to the movie.”

By bookending the film with cartoonish elements borrowed from the source material, White felt he established the film’s tone, but perhaps the best homage to the original novel is a no holds barred brawl between the mysterious Aisha (Zoë Saldana) and the leader of the Losers, Clay (Jeffrey Dean Morgan), that ends with a hotel room engulfed in flames.

“We wanted that scene to be amazing,” Saldana grins. “While they’re beating the crap out of each other, they’re also getting to know each other. It’s like a very violent conversation.”

After star-solidifying turns in Avatar and Star Trek, the actress is becoming known for her ability to speak volumes with her body as well as having a commanding presence, which allows her to go toe-to-toe with the big boys. Saldana, a silver of a woman whose striking beauty is belied by her gregarious convivial nature, says she loves being asked to bring the pain, especially as the only girl in the cast, even if it means “you have twice as much work to do because you don’t want to be singled out. I really wanted to impress the guys.”

Asked which was more difficult, the bare-knuckle brawl or a slow-mo love scene that features a whole lot of Saldana’s skin, Morgan hoots with laughter.

“The love scene, yeah, that was hard,” he scoffs. “I had a rough day that day. [I was like,] ‘I need another take. Sylvain, come on. I don’t feel like she flipped her hair right on that one,’” Morgan laughs. “Technically, the fight was much harder, both physically and trying to get the tone of what we needed to accomplish in that scene. Yeah, the love scene? Bring that on! I had Zoë Saldana sitting on my lap, naked.”

Saldana, once her hysterical laughter subsides, continues, “It helps when you get along with the actor and that Jeffrey was such a gentleman and so respectful because, trust me, as a woman, try doing that with a friggin’ prick. Been there. It’s not a good day at work. You’re the only one who’s naked, and you have to act like you’re not aware that you’re naked. [But] when you work with a good director and a good actor, then it’s just another Tuesday, and love scenes are just like fight scenes.”

Watching the cast interact, their chemistry and camaraderie are blaringly apparent. It’s that intangible alchemy that makes The Losers such a pleasure to watch. White, who reveals each person cast in the film was his first choice for the role, gives all the credit to his actors.

“In the end, the movie is good because of them,” he smiles.

And, yes, their charisma and talent are definitely part of the equation, but another big part of the film’s success is its humor and wit.

“We’re almost winking at action films,” White says. “[The Losers] has a sarcastic, cynical look at them, but at the same time we’re laughing with it. It’s part of the comic book world, the fun the movie exudes. It was always about not pushing it too far but far enough so that people would laugh.”