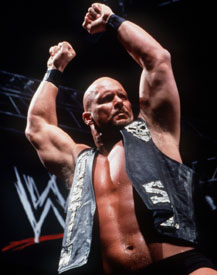 1. Meryl Streep, mastering a Latvian accent. 2. Mankind, busting a chair on top of an oiled musclehead. What’s the difference?

According to former wrestler/budding actor "Stone Cold" Steve Austin: Not much.

"Acting is the same as wrestling. You go in and use psychology to manipulate the crowd, to tell the story. In the wrestling ring, it’s a play every night of the week," says Austin, who stopped in Minneapolis two weeks ago to publicize The Longest Yard.

"Wrestling is more of an ad-lib type of thing, but we still had to know how to help each other tell stories, just like actors," says Austin, a divorced father of two who recently relocated from Texas to Los Angeles. "But I’m not going to call myself an expert actor. Acting involves a lot more memorization."

Austin is one of many former football players and wrestlers in the Adam Sandler film. It’s a comedy/drama about a former quarterback (Sandler) sent to prison, where the warden forces him to organize a team of convicts (including Chris Rock) to get roughed up by a team of guards. Many convicts and guards are played by mesomorphs such as Brian Bosworth, Mitch Goldberg and Michael Irvin.

"We all had to read for the same parts," says Austin, clad in his own line of tracksuits and perched massively on a tiny stool in a hotel lounge. "We were all getting paid the same – none of us got rich off this movie – so it didn’t matter which part we got."

He says it’s tough to evaluate his own work. "I couldn’t really tell how I was doing. I’m used to 20,000 fans screaming at me," says Austin, who says much of his best, "unsavory" stuff had to be cut to get Yard a PG-13 rating. "The director would always be telling me, ‘That’s great, that’s great.’ But he said that to everyone."

Austin fans can expect to see more of him at the multiplex. In August, Austin begins filming the lead role in an action film, Condemned, and he has signed a three-year movie deal with World Wrestling Entertainment.

"I don’t like going to the movies, but when I rent stuff, it’s Clint Eastwood, Charles Bronson, Burt Reynolds. The original The Longest Yard is a classic. That’s the stuff I’ll do. Action-adventure is a good fit for me and maybe some comedy later," says Austin. "Will they win – what do you call it – Oscars? No. But they’ll be kick-ass movies."

Austin also has specific ideas about what he won’t do on the big screen: "I don’t need to play a pro wrestler, that’s for sure. And I don’t want to wear a ballet outfit."

Moviegoers may recall that Hulk Hogan tu-tued his way through Mr. Nanny, which pretty much put a period on his film career.

"I can recall that, too, and it didn’t work out for him too well, did it?" Austin chuckles. Tutu or no, Austin says the one offer that might tempt him back to wrestling would be a matchup between him and Hogan.

That historic bout could earn Austin a lot of money, but he says he doesn’t need money. What he needs is fun of the kind that occurred when he and the other biceppy actors in Yard were chilling between takes. With all the testosterone and Budweisers being passed around, you can imagine the sort of stories they were telling. In fact, you'll have to imagine them. When asked to elaborate, Austin is stone cold.

"I can’t drop the dime. I’m not going to Canseco anyone," says Austin. "We’d talk about the movie and about the hits. Between us wrestlers and the football players, there was some hard hitting in the football scenes. And, afterward, we liked to drink a few beers and blow off steam. That’s what I’m looking forward to on my movies, because that was probably the most fun I had on Longest Yard."

The Longest Yard is currently in theaters.