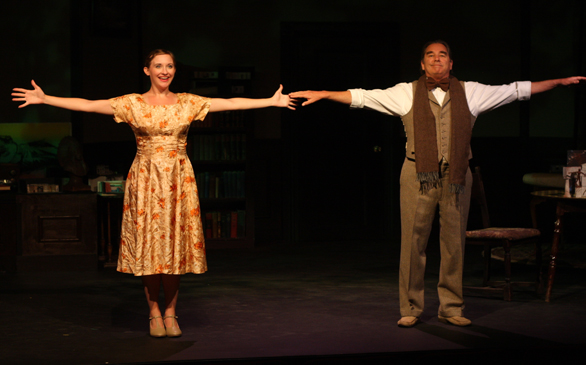 It’s not often that you get to see a celebrity work with his children on such an intimate project as Beau and Emily Bridges do in “Acting: The First Six Lessons.” Here, the pair perform Richard Boleslavsky’s beloved book by the same name, and both Bridges demonstrate their acting chops, with Beau playing the Teacher, an experienced actor who helps Emily’s the Creature hone her talents for both the stage and the screen.

On their second performance of its run, Beau (brother of Jeff, this year’s winner for Best Actor at the Oscars) was good, but a little off his game, but his daughter Emily was a force to be reckoned with. Over the course of the 100-minute play, Emily took the Creature from an enthusiastic acting newbie through all the steps of despair, frustration and learning (including a brilliant scene that perfectly illustrates the difference between overacting and letting the words do the work) to finally emerge as a confident, skilled actress. This development throughout the play really speaks to the younger Bridges’ considerable talent, as does the passion she interjects into each scene. And although the play is set in 1933, contemporary job seekers will sympathize with the process of landing a job and feeling inadequate in the role.

Aspiring actors and Beau Bridges fans will especially find “Acting” useful, though, since not only does Beau lead the way through each lesson, but both Bridges also host a Q&A at the end of each performance. The chance to speak to both actors and get advice from one of the greatest families in acting shouldn’t be passed up.