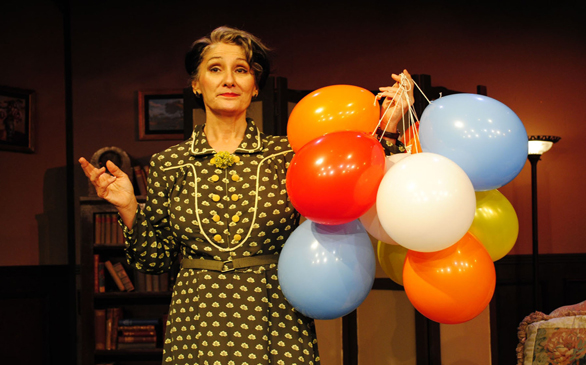 Kres Mersky in “The Life and Times of A. Einstein”
(Credit: Paul Gersten)

I can never put my finger on it exactly, but there’s something about Albert Einstein that’s just so interesting. Maybe it’s his undeniable brilliance or his fame. Maybe it’s his courage or his dogged determination. Or maybe it’s just his hair. In any case, whenever there’s anything about the life of Einstein, I can’t help but take a closer look. Which is why I was so excited to see “The Life and Times of A. Einstein.”

“Life and Times” gives a few brief snapshots of Einstein’s story from just after he began his new life in Princeton, N.J. to his death, all as seen through the eyes of his secretary, Ellen (playwright/star Kres Mersky). It’s Ellen’s job to make sure life runs smoothly, from appointments to event planning to publicity and protection, and Ellen has devoted her life to it. In a series of three scenes, we get a heartwarmingly comedic glimpse into the mentality of the man straight from a woman who is devoted in her admiration of him.

The only problem is it’s a one-woman show. Yep, you heard me. That means while you hear stories about some of his life, we get to see exactly no Einstein. Each vignette is actually staged as a press conference, with Ellen stalling the journalists by fielding their questions herself, but with a quiet audience in an intimate space, it’s hard to imagine a real press conference going on in the background. With jokes that are few and far between (but worth it when you get to one), Mersky does give an outstandingly nuanced and impassioned performance on the whole, but she often reaches too hard to keep the audience engaged (no small feat for a one-woman show). While she throws out some fun anecdotes about Einstein, sometimes it feels like Ellen focuses too much on herself and steers the play away from the titular man. Add this to the subtle transitions between scenes, and the play’s plot (such as it is) winds up falling flat. Luckily, Mersky’s superb acting manages to make the play more than bearable.