What to Expect...: When You’re Expecting to Graduate 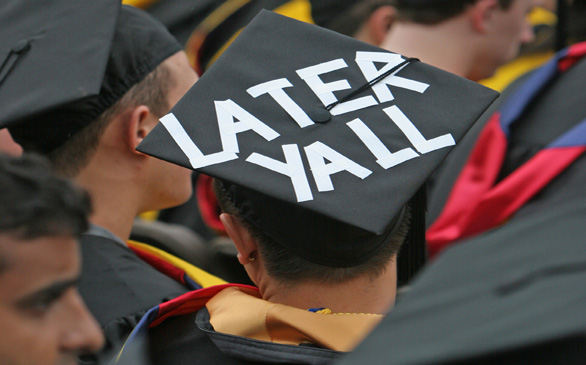 It’s April going on May, and you’re freaking out. Don’t worry, as someone who has gone through it, I can tell you: It gets worse. I graduated in 2009, at the height of the recession. For 2010 graduates, the news about the job market is looking even bleaker.

Now, there’s no how-to guide on what to properly expect the day you get your big receipt (I mean diploma) from college. All I can tell you are what my friends and I experienced after our turn, and though you may be saying, “Buddy! This only happened to your inner circle (scoff!). This wouldn’t happen to me.” My response to your misplaced anguish is: I agree.

But let me tell you this: A buddy of mine was offered a lucrative position at the financial firm Bear Stearns. For a while his decision to “Suit up!” was well worth it, working 40 hours a week for great pay. Later, he was laid off after six months due to corporate downsizing. You can’t prepare for these things. 2009 was an evil pitchfork against graduates; prospects for new hires dipped below 40 percent and worst of all, health insurance companies canceled coverage if you were on your parent’s plan.

At first, there’s a feeling of euphoria and optimism upon taking off your cap and gown. Somehow you’re ready to take on the world like when you start to buy school supplies the first week of class. Another friend of mine immediately moved to Washington, D.C. with hopes of a position in her field of study. She later learned that her Chuck Taylors wouldn’t suffice in snow and there was no job opportunity waiting for her. She moved back home to her parents three months later.

After the initial high hopes of sending out resumes start to shrivel and die (sending out more than 50 with only one response can do that to you), that’s when the stages of clinical depression start to set in. It was extremely common to watch my friends move back home where mom and dad were more than happy to assign chores and have them home no later than 11 p.m. When everything good in the world like friends, sex and booze is taken away from you, your mind and body begin to atrophy at a staggering rate. You start to yearn for a connection with the outside world as your days are now filled with hopelessness and despair.

Also, there’s a tendency for some to become nocturnal. Every person you meet outside your house and on Facebook will ask, “So, what are you doing?” For me, I made some awkward bodily twitches while talking about my “plans.”

Initially, to make ends meet, most of my friends and myself included were forced to take a job that, to give us graduates some credit, any AP high school student can do for minimum wage. Basically you’re back on the bottom, whether it’s catering to some sort of customer service, becoming an assistant’s assistant or even worse, an unpaid intern (which fall under the same category as indentured servitude and slavery). At least though, you’ve come to the point where you’re off the couch. It’s a start.

Sooner or later, you start to establish a routine of going to work and coming home, and life becomes normal again. Life moves on, you reconnect with friends and make new ones. Thus, the convalescent cycle of post-grad life is complete. If you agree with this, then congratulations! You’ve reached adulthood. If this sounds too good to be true, read on.

As you get back to normalcy, guilt and regret start to settle in. The idealistic undergrad starts to haunt your dreams, dreams of making a difference in the world as a famous filmmaker, mathematician, professional beatnik poet. If only …

In reality, wherever you end up is up to you. Though graduation is scary for those who don’t have any concrete plans, just know that college is only there to prepare you for your destination, not get you there. The rest depends on your will to make it happen. If you start to feel the above symptoms by the end of June, I warned you.

Just remember, it takes time to adjust, but you eventually do. Case in point: My friend who came back from Washington, D.C., is now set to attend graduate school in San Francisco this fall, away from her parents and in her field of study.