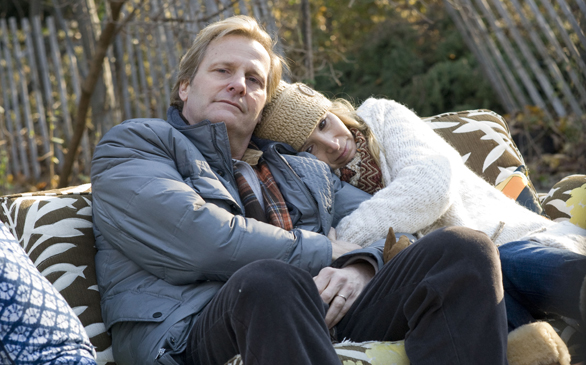 In the quirky new film Paper Man, by writer/director duo Michele and Kieran Mulroney, audiences look inside the lives and minds of your not-so-usual suspects.

Richard (Jeff Daniels), a failed novelist, is encouraged by his successful surgeon wife, Claire (Lisa Kudrow), to live in the beach community of Montauk, Long Island, during the off-season to help with his writer’s block. Feeling the pressure from his wife and his publishing company to produce another book increases his inability to write.

Always accompanied by his imaginary childhood friend, Captain Excellent (Ryan Reynolds), he meets a 17-year-old girl, Abby (Emma Stone), who seems lonely and to be dealing with more than your normal teenage angst. Abby also has an imaginary friend (Kieran Culkin) who proves to be a large part of her life. These two embark on a rare friendship, which begins with her babysitting for his nonexistent child. The story continues to unfold like an onion as more layers are peeled off from the surface.

“We wrote Paper Man at a point in our lives where we wanted to do something for ourselves and wanted to produce something original,” writer/director and husband/wife duo Michele and Kieran Mulroney reflect. “We put our armor on and went on the indie film roller coaster ride.”

The filmmakers were very fortunate to put together a really great cast who came prepared and ready to work.

“Indie films are always a little more interesting and creative,” says Kudrow. “Also, I wasn’t nervous to work with first-time writers and/or directors as I have plenty in the past. It’s really about the script.”

Kudos are also given to Emma Stone.

“She was amazing and remarkable,” marvel the Mulroneys. “She came in and auditioned her butt off and has a depth that you get to uncover.”

They continue, “We were so lucky to have great people around us, cast and crew who were extremely talented.”