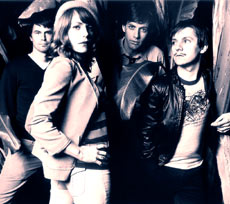 Since its inception in 1998, Rilo Kiley has garnered a rabid fan base across the country. Their live shows are sold-out events. Their music has been featured on teen fantasylands such as Dawson’s Creek and MTV’s Undressed. But are they happy? "I’m driven," singer Jenny Lewis states with a crooked smile, "I guess that’s a weird answer to that question…"

Lewis and company have relied on their drive to get them through years of constant touring. "We don’t have significant others, so it’s easy for us to get up and go. Except for Pierre, because he has a new baby," Sennett sighs. Lewis nods, saying, "Despite everything, I wouldn’t change this opportunity for the world. There’s nothing like being able to make a network in all these different cities." Between all the tours, coming home is a strange experience for the band, leading Lewis to describe the experience as "catching up on our own lives. We come home to stacks of bills and things that need to get done." They won’t have too much time to catch up, as they’re scheduled to tour with fellow L.A.-based band Arlo in October.

Regarding the move from Barsuk Records to Saddle Creek, Lewis explains that it was an amicable parting due to the lack of obligations to the former. "Musically, we’re at a really good place right now. We prefer smaller labels." Sennett emphatically agrees: "Being on an indie label allows us more creative freedom." The results of that newfound freedom can be heard on their second full-length album, The Execution of All Things, due from Saddle Creek Records on October 1st. Recorded in Nebraska, the new album is a solid example of maturity, with a smoother edge that’s due in part to what Sennett describes as "better and more complex production." Execution features a more melancholy take on their eccentric yet endearing lyrics, as well as some surprising arrangements incorporating strings and French horns, both of which were earmarks of their previous disc, Take Offs and Landings. Lewis’ girlish voice soothes even the most poetic and painful words: "But sleep never comes to you, it’s just guilt and forever wakefulness of the weak." Unlike angry girl singers, the dichotomy between Lewis’ sweet vocals and the sting of her words make the lyrics even more effective and poignant. Lewis and Sennett’s lyrics offer subtle emotions and unique spins on stale subjects like love and general unsettled feelings. "Lyrically, if I’m singing then I wrote it and vice versa" explains Lewis of her collaborations with Sennett. "We’re both focusing on making music that’s broader and more complex than before."

Bands of lesser dignity might allow the sudden influx of publicity and the ensuing popularity to affect them. Yet any personality conflicts or confusion are quelled by the extremely close bond each member shares with each other as well as with those they surround themselves with. "We argue, but there’s a lot of love between us."

Love and happiness are recurring themes in the conversation. As Hemingway once said, "Happiness in intelligent people is the rarest thing I know." Jenny Lewis sighs, then smiles. "There’s a certain amount of comfort in that, isn’t there?"