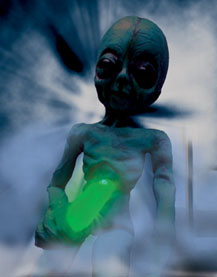 Set up like a somewhat twisted, fireside-set episode of "Masterpiece Theater," Cerebral Print: The Secret Files begins with an introduction by a rubber-faced, blue-robed actor who invites audiences on a wild, spooky ride to discover what the people behind the "Cerebral Print" agency are all about.

According to the film – which is a random collection of similarly themed vignettes written and directed by Ford Austin and starring a small stable of actors in a multitude of roles – a "cerebral print" is an image extracted from the brain of a recently deceased extraterrestrial, which shows what happened to the ET minutes before it died. In each vignette – the titles range from "Brothuh of Cerebral Print," in which the alien encounters a pimp, to "Cerebral Print Halloween Special," where the alien freaks out and goes on a murder spree because he didn’t get a Reese’s peanut butter cup – the ET (whose only visible parts in each episode are its arms and maybe legs, as the shorts are filmed from the alien’s POV) goes through each episode carrying a probe. The ET uses this probe, which looks like a cross between a monster-sized jellybean and a dildo, for "probing" people when he gets angry or upset.

The result of the vignettes is an alien autopsy, tons of ultra-cheesy special "probing" effects and a handful of performers who do little else than run from the alien and his "probe" and shamelessly indulge in extreme over-the-top acting.

Nevertheless, Cerebral Print: The Secret Files is the mark of a creative spirit, and the passion in the production definitely reflects that.

Cerebral Print: The Secret Files will screen June 3-9 at the Vine Theater, located at 6321 Hollywood Blvd., in Hollywood. For screening times and more information, call (323) 463-6819 or visit www.AngryBabyMonkey.com.