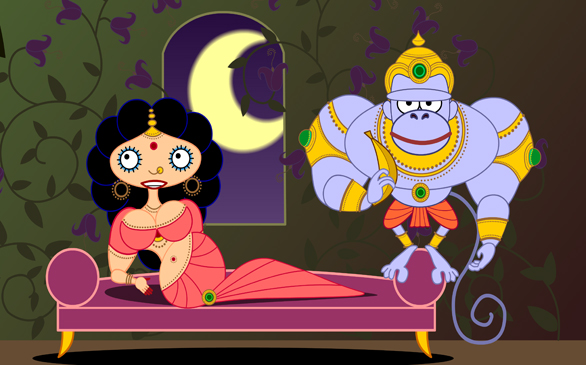 There was a time when animated feature films introducing audiences to much ballyhooed tales of mythical epics such as The Iliad or The Lord of the Rings would be conceived as an ideal vehicle to teach children about tales of cultural significance. Then Sita Sings the Blues came along and changed all that, as Nina Paley’s animated story of the Indian epic love tale told in The Ramayana proves to be an awesome watch for children and adults alike.

Combining stunning Pixar-like animation with witty humor about one of India’s most famous romances, Paley adds a unique layer of fictionalized storytelling told in the craftiest of ways, making Sita Sings the Blues perfect for adult audiences. The first sign is in the very nature of the artwork – the artist probably had Betty Boop on his mind when he drew each of the film’s cartoonish shadow puppet characters.

In intertwining Sita’s ancient story of being kidnapped into the forest and forcibly married with Nina’s relationship with her boyfriend coming to an abrupt end via an e-mail message from India, Sita Sings the Blues establishes a strong parallel between the two ill-fated female lovers. In the process, Paley manages to make relevant an old epic that many people may have otherwise written off.

With timely adult humor that is as modern as it is witty, Sita Sings the Blues is the perfect animated film for older audiences. Add to the mix its playful dialogue that helps make an otherwise difficult story easy to comprehend and Sita Sings the Blues proves why it is a film worthy of so many awards.