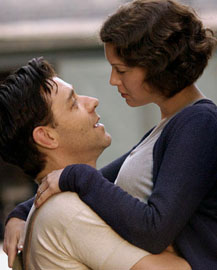 When comedian Chris Rock commented during this year’s Academy Awards that Russell Crowe should be Hollywood’s go-to guy for any type of historically based film, he was pretty much dead-on. After all, Crowe is the guy who wowed audiences as reluctant hero Maximus in Ridley Scott’s Gladiator and later as real-life schizophrenic genius John Nash in Ron Howard’s A Beautiful Mind. And he is, by far, one of the few actors working today who will fully slim down, buff up or perfect another accent in order to pour 110 percent of himself into a new role.

Crowe doesn’t disappoint in Cinderella Man, his second collaboration with Howard, in which he plays the title role of Depression-era boxer Jim Braddock.

In the film, Braddock, who nearly misses winning the heavyweight title of the world, loses his comfy lifestyle following the onset of the Great Depression. The New York-based boxer and his family – which includes three young kids and his wife, Mae, played with plenty of sequestered emotion by Renee Zellweger – must now fight a day-to-day struggle to find work, pay the bills and put at least a little bit of food on the table. Jim is trying to get back into the boxing game, too, and does so with the help of his longtime trainer and friend Joe, portrayed with witty gusto by Sideways star Paul Giamatti.

Aside from Crowe and Zellweger’s splendid performances and wonderfully understated chemistry, Cinderella Man also succeeds on a number of different levels. For one, it’s paced extremely well and filled with equal parts drama, heart and slam-bam in-the-ring boxing scenes. This is probably the doing of screenwriter Akiva Goldsman, who also collaborated with Howard on A Beautiful Mind. When put side-by-side with Howard’s sentimental direction (which is usually the case in most of his films), Giamatti’s script-balancing wry humor and the film’s elegantly faded sets and costumes, Cinderella Man proves itself a definite contender.