Ozomatli: L.A.’s Voice of the Underdog 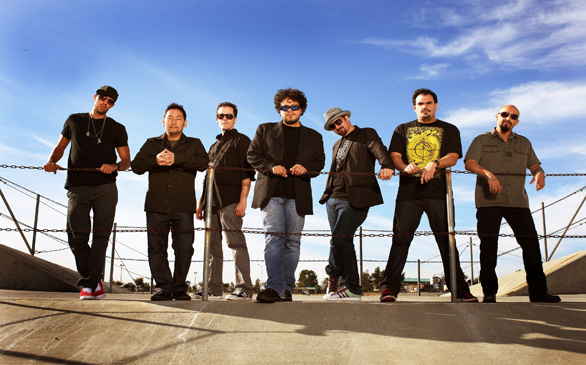 Diversity does not always amount to success, but Ozomatli has proven it definitely can in their 15 years of existence. Formulated in Los Angeles and known to most of the public as simply Ozo, this multi-ethnic music group has created a lively image in the industry. Ozo have always incorporated Latin, hip-hop, rock, funk, jazz, world fusion and Middle Eastern elements into their tracks, and their latest album, Fire Away, is no different.

“This album took two years in the making. It was a really hard process,” Wil-Dog Abers states. “It was a long process, but a beautiful one.”

Abers, who plays the bass and marímbula and provides background vocals, goes on to explain that the group just jammed in a studio for a couple of weeks before even recording an actual song. Fire Away features 11 fresh tunes, including “Gay Vatos in Love.” This song is a symbol of the band’s support for same-sex marriage. Though Ozo does not have any gay members, this is by far the most controversial track the group has created.

“The chorus for this song was written first,” Abers says. “With all the Proposition 8 stuff going on, we just felt like we needed to be a part of it. We always have tried to be the voice of the underdog, so that is just a step in the right direction. We represent everybody.”

One of the interesting phrases in the lyrics of this melody is, “Juan Gabriel says, ‘Amor Es Amor.’” Juan Gabriel is a widely known Mexican singer in Latin America because of his prolific romantic song catalog. Although he has officially not come out of the closet as Ricky Martin recently did, Juan Gabriel is predominantly thought to be gay. His vocal opinion on the matter is that “love is love.”

Commenting further on the subject, Abers remarks, “Everyone has the right to live a happy life in whatever they like or choose. They are not hurting anyone else, and it is their right to love who they want to love, and we stand by that.”

Another interesting tune is “It’s Only Paper,” which is their first single from the album and features Jack Johnson; the piece holds great meaning as well. Without human beings setting a value to it, money is just paper. It does not matter whether you are rich or poor.

“If we put a stack of money on a table without us in the room, it is only paper,” Abers says. “Without humans creating what it means and society putting a value, it is just paper.”

Johnson’s collaboration came spontaneously when Ozo was recording in his Los Angeles studio. Johnson appeared at Ozo’s recording session and assisted them in finalizing “It’s Only Paper.”

Ozo’s diversity has created avenues for them to perform at different show locations, ranging from trips to South Africa, Madagascar, Mexico and multiple cities in Europe. Within the United States, Ozo has delivered their fusion sets from Hawaii, Colorado and Texas to the East Coast.

This year, the band will take part in two special performances with the St. Louis Symphony Orchestra in Missouri and the Boston Pops Orchestra in Massachusetts for the 125th Pops Anniversary Celebration in early May. Additionally, Ozo has two prominent stops in China and Mongolia, serving as U.S. Cultural Ambassadors with the State Department.

On another note, Ozo is also scheduled to participate at this summer’s Bonnaroo Music Festival in Manchester, Tenn., where 75,000-plus fans from around the world will gather. And when it comes to sports, Ozo is not left behind either. The Los Angeles Dodgers are currently utilizing two of the band’s tunes as anthems at Dodger Stadium: “Dodgertown” and “Can’t Stop the Blue.”

On April 1, Ozo celebrated 15 years of being together. As a tribute and honor to the band, Mayor Antonio Villaraigosa declared April 23 to be “Ozomatli Day” at City Hall from 9 a.m. to 2 p.m.

“This just means we have stamped ourselves in Los Angeles,” Abers declares. “We have stayed together in a healthy way.”