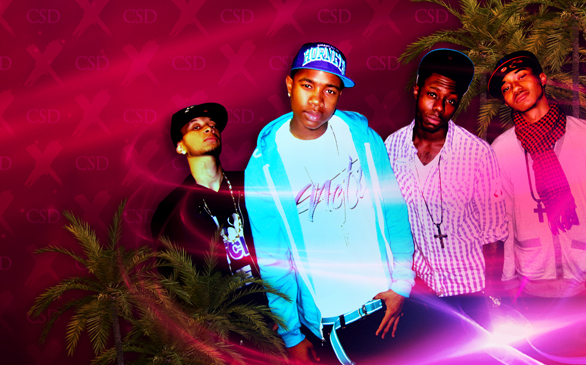 Do you know how to Dougie? Los Angeles’ hottest young hip-hop act, Cali Swag District, is intent on spreading the dance craze throughout the world, and so far they’ve done a pretty good job. The group’s hypnotic single “Teach Me How to Dougie” has garnered a million-and-a-half views on YouTube, and radio stations across the country (including Power 106) have the song in regular rotation.

Yung reflects the group’s contagious enthusiasm when asked about plans for the future, “I play too much, but I want the crown Tyrese has! I’m about to put him out of business. I’m like sexy chocolate – I’ve been lifting weights, and as soon as I take off my shirt I’m taking everybody out!”

Samantha Ronson is set to DJ during dinner in memory of DJ AM who was a big supporter of MusiCares and who DJ’d the event last year. Others scheduled to appear include Kellii Scott, Scott Sorum, Leah Randi and the ex-vocalist for Bow Wow Wow, Annabella Lwin. Find details at musicares.com.

Sex Pistols singer Johnny Rotten issued a brief comment: “For me, Malc was always entertaining, and I hope you remember that. Above all else he was an entertainer and I will miss him, and so should you.”

Pistols guitarist Steve Jones had a bit more to say about McLaren including a very personal revelation: “I was upset when I heard the news as I’ve always had a soft spot for Malcolm. I knew him since I was 17 before the Pistols formed. I used to drive him around in Vivienne Westwood’s car to the tailors in London in the days of the Let It Rock clothing store. Malcolm was definitely the Brian Epstein of punk; without him it wouldn’t have happened the way it did. I stayed friends with him throughout the years despite some of our differences. He came on Jonesy’s Jukebox a couple of years ago, and that’s a good memory. But my fondest memory of Malcolm, and I loved the guy, was his birthday gift to me when I turned 21 – he got me a hooker and some heroin.”

McLaren died of cancer at age 64 on April 8.

Anti- has just released a 15-cut sampler of tracks taken from their roster of new and upcoming releases. Available at the bargain price of $2.99, the compilation contains four songs that are at the moment unavailable elsewhere: “Goodbye Sweet Dreams” by Roky Erickson, “Salt of the Earth” by Bettye LaVette, “All Alone in an Empty House” by Lost in the Trees and “Slow Man” by Sage Francis. Other Anti- acts contributing include Galactic, Dr. Dog, Tom Waits, Islands and Rain Machine. Find your copy at iTunes.

Something Corporate: Played in Space

Geffen and UMe are celebrating the reunion of acclaimed Orange County band Something Corporate by issuing a special two-CD retrospective called Played in Space: The Best of Something Corporate. One disc is packed with favorites like “Punk Rock Princess” and “If You C Jordan,” while the second disc features unreleased cuts “Konstantine” and “Watch the Sky” along with a remix of “Forget December,” an Adam Young (Owl City) remix of “I Woke Up in a Car” and new recording “Wait.” Played in Space drops April 27, and the iTunes version of the set includes a new recording of “Letters to Noelle.”