College in a Nutskull: A Crash Ed Course in Higher Education 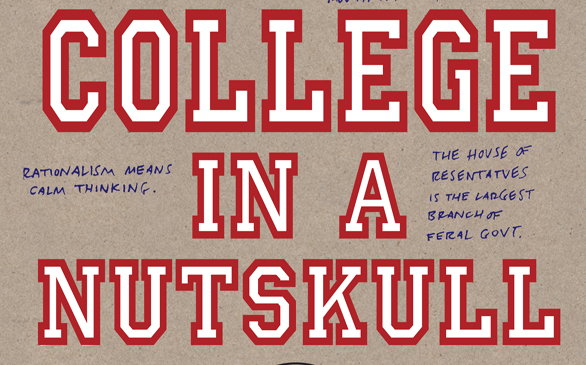 Pop quiz! Quick, what are the three branches of American government?

If your answer was, “Legislative, Executive and Judicial,” then by all means, in the words and tone of Ed McMahon, “You are correct, sir!”

But if your answer was, “President, Church and State,” you are not alone. Some student in some college wrote that exact answer. No lie.

Professor Anders Henriksson, the author of Ignorance is Blitz, has returned with a whole new batch of hilarious material that comes straight from actual blue book exams of real college students in America, with a substantial contribution from other institutions in places likes Australia and Canada.

College In A Nutskull: A Crash Ed Course In Higher Education shows how students try their best to fluff and bluff the right answer when it comes to the nitty-gritty of a test and their desperate attempts sometimes lead to wacky, comical answers.

English Literature: “Shakespeare won the Nobel prize on several occasions. This makes you a nobel and involves being nightied by the Queen.”

Psychology: “Most psychologists believe that human behavior is controlled by supernatural forces. We can understand this concept better if we think outside in a box.”

Economics: “One way for a business to cut costs is to reduce the size of the workers.”

Henriksson’s book is a quick read and will definitely bring a lot of ha-ha’s out of you, but it might also make you ponder what some undergrad students are actually thinking and if they are taking their slice of higher education seriously.

College in a Nutskull is currently available.