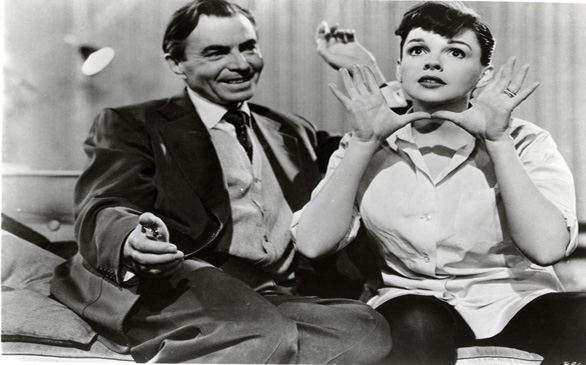 A Star is Born serves as the opening night event April 22.
(Credit: Courtesy of TCM)

This is huge. I mean, this is really, really huge, and I am so incredibly excited for it. They are my favorite people. They are my friends who keep me company during sick days at home or nights when I don’t want to go dancing, when all I want to do is stay in with a bowl of ice cream and learn from their lessons of relationships, drama, crime and love. They never let me down.

Finally, after decades of under-appreciation, they are being recognized by our generation of moviegoers who don’t seem to understand their films. Really, kids these days don’t even try to get to know the people and the movies that have made the industry what it is today.

The funny part is, they are always around. You can catch them at any time, day or night. They even work holidays. So inevitably, you know them. You may not always choose to click on their channel on a Friday night like more than 80 million other homes do, but you’ve seen them. Personally, I am a big fan of black and white films starring the heavy hitters like Monroe, Van Dyke, Bergman. These are the real stars who have defined Hollywood as we know it, and they are my friends-on-demand.

Turner Classic Movies (TCM) is a Peabody Award-winning network that, for 15 years, has presented great films, uncut and commercial-free. The first-ever TCM Classic Film Festival is being held this week in the heart of Hollywood at such historic venues as Grauman’s Chinese Theatre and the Egyptian Theatre. The Hollywood Roosevelt Hotel, the site of the first Oscar ceremony, acts as the official hotel for the festival and venue for fest pass holders.

The festival also features celebrity appearances by actors, actresses, directors, producers and other important figures, screenings of classic movies and major events designed for classic movie lovers. Already slated to make an appearance at the festival are Mel Brooks, Jerry Lewis, Tony Curtis and Jon Voight, to name a few.

More than 50 films in all are going to be screened. Many have special introductions to provide context about the film. TCM’s primetime host Robert Osborne is the official host of the festival. TCM also partners with Vanity Fair Magazine – which created the Penguin book, Vanity Fair’s Tales of Hollywood – to bring the book to life. Writers from the magazine, actors and filmmakers reveal behind-the-scenes stories of many of Hollywood’s greatest films.

The network also provides a sneak peek into its most ambitious original programming yet. Moguls and Movie Stars is a documentary about the origins of the Hollywood film industry and is set to premiere on TCM in the fall.

Just a few of the films I love that are going to be screened are Metropolis (1927), featuring previously lost footage. This is a classic directed by renowned moviemaker Fritz Lang, and you can’t call yourself a film lover if you haven’t seen it. The Producers (1968) is also to be screened with a discussion with writer/director Mel Brooks, who receives a star on the Hollywood Walk of Fame during the festival.

Stanley Kubrick’s 2001: A Space Odyssey (1968) and Cleopatra (1963) are going to be shown in 70mm widescreen. The TCM Classic Film festival also has slated restored films like Sunnyside Up (1929) and The Big Trail (1930); rare screenings of A Woman’s Face (1940) starring Joan Crawford; and films that are sure crowd pleasers like Hitchcock’s North by Northwest (1959), Some Like It Hot (1959) starring the ever-charming Marilyn Monroe and Doris Day’s Pillow Talk (1959). Of course, it wouldn’t be a film festival dedicated to classic movies without an appearance by one of the most beloved films of all time, Casablanca (1942).

If you missed the Gene Kelly event I mentioned a few weeks ago, you are blessed with another opportunity to catch a screening of Singin’ in the Rain (1952), which is going to be introduced by Kelly’s co-director Stanley Donen.

Branch out a little, and try something old.