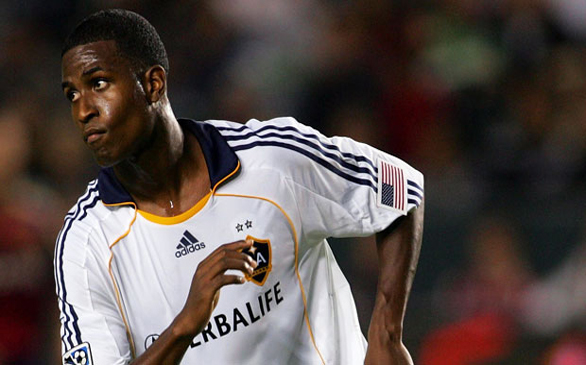 Another game, another win. The Galaxy collected a 2-1 victory Saturday over visiting Real Salt Lake at the Home Depot Center.

“It was a good game,” Galaxy coach Bruce Arena states. “Two good teams playing hard. We beat a good team; we are pleased with the results.”

Forward Edson Buddle continued his above par play after netting two goals, bringing his 2010 season total to seven thus far after four matches. The seven scores are a new MLS record for a player to start the season, which was previously held by former Guatemalan forward Carlos Ruiz in 2002 at six goals. Ruiz played for Los Angeles, too.

Buddle currently leads the MLS in goals as well, and he helped the Galaxy improve to 4-0.

“Buddle is supposed to score goals, and he is scoring goals,” Arena says. “He has been great. His performances have been outstanding.”

Team captain Landon Donovan assisted on the first score in the 12th minute. Donovan sent a corner kick from the right flank into the box to find Buddle’s head, which eventually placed the ball perfectly at the back of the net. Donovan registered his league-leading fourth assist.

The Utah based squad (1-2-1) knotted the match at one a piece four minutes prior to halftime, as midfielder Kyle Beckerman scored off a right-footed kick from outside the box. Buddle’s game-winning goal arrived in 76th minute after firing a right-footed shot past goalkeeper Nick Rimando. Brazilian Juninho received the assist for Buddle’s game-breaking mark.

“A big part of his success today is because he has been able to stay healthy,” Arena says of Buddle.

Los Angeles travels to Kansas to face the Kansas City Wizards Saturday. Kick-off is at 5:30 p.m.