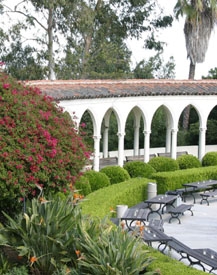 We had driven 25 minutes from West Hollywood to find the place, which was far up a winding road off Sunset Boulevard in Brentwood. But the college didn’t spark recognition. It was supposedly used as the exterior of fictional Harbor High School in the television show "The O.C." But maybe not.

That’s when I started to suspect that this pilgrimage might be harder than we thought. But how could we stop looking? We’d only just begun.

Seeking out sites where the hit Fox TV nighttime soap opera is filmed is enticing for young visitors to Los Angeles. Millions of teens and college students are hooked on the series that follows the lives and loves of a family in Orange County’s wealthy Newport Beach. We had heard that the series used many Los Angeles-area shooting locations. In fact, we’d heard that Santa Monica Pier’s Ferris wheel may have been used in the critical episode where main characters Ryan and Marissa first kissed.

So after 45 minutes of slogging through bumper-to-bumper traffic on the Santa Monica Freeway, we finally paid $7 and parked at the crowded Santa Monica Pier.

Within a minute, disappointment.

"This isn’t it," said C.C., 18, looking at the giant wheel with the gondola-type cars hanging from it. "Nothing looks familiar."

So at the crack of dawn on a Sunday morning, we drove 55 miles south on the San Diego Freeway to the real Orange County and the real Newport Beach. The city hasn’t had so much publicity since, well, since never. The visitors and convention bureau even has put out a map where fans can find the sites that inspired the TV show (find it at www.newportbeach-cvb.com or call (800) 942-6278).

First stop: the Seafood Shack. In real life, the restaurant is the Crab Cooker on West Balboa Boulevard.

We found it, but it didn’t bear any resemblance to anything in the show.

"It might be where Ryan used to work, but he doesn’t work there anymore, so that location isn’t even used," my daughter said.

Next stop, 15th Street Beach. Surfers were everywhere on the beautiful beach and it looked lovely. But nothing looked familiar. No sign of the O.C. gang.

"Only once did Summer and Marissa go to the beach, but not since then," C.C. said of two "O.C." characters.

Then we went to Balboa Pier. We walked way out, enjoying the sunshine.

The map said it was the show’s Pier Diner, but maybe not.

"I don’t think this is it," C.C. said, looking with suspicion at the lovely pier stretching out in the Pacific. "I think it was Newport Pier."

Feeling a bit more desperate, we walked across the street and through the charming town. It was early morning, and the tour boats squeaked against the docks. The wind was gentle. Then, a ha. The Balboa Fun Zone. Something sparked. Something about the little Ferris wheel looked familiar. Just maybe, it was the place where Ryan and Marissa had their first kiss. Could it be?

"I think this is it," my daughter said. She took a picture, just in case it was.

Then, we drove to the Newport Pier. And walked to the very, very end to the Bait Shop. In the show, it is a busy nightclub. In real life it is the Newport Grill and Sushi Bar. People were fishing in their undershirts on the pier. We went inside.

The place was dim and empty on a Sunday morning, except for the staff.

"Well, we’re in the credits," said a waitress. "I think something was filmed here."

"The people here don’t like that show," said a waiter. "When they tried to film, some people yelled at them so they went back to L.A. The whole thing is filmed in L.A. because it’s closer to the studio."

We walked back to the car. C.C. was quiet.

"What do you think?" I asked finally.

"I think the tourism people just watched the show and picked places in town that they thought were kind of like the show," she said. "It’s not real."

Trying to perk her up, I drove to the Fashion Island Mall, often mentioned in the TV show. The mall is a real place, but it looked like any other mall.

Finally, we searched for the Newport Beach Visitors and Convention Bureau, where the show’s actors put their hands in cement for posterity. After driving a few times around the mall’s ring road, we finally found the bureau tucked away in a labyrinthine set of buildings.

It was closed. But we found the cement blocks pressed against the window. Ryan (Ben McKenzie), Sandy (the dad, Peter Gallagher) and the crew – handprints and signatures, kind of, sort of interesting but not really.

C.C. was silent. Somehow, it wasn’t as moving as she’d hoped.

We drove all the way back to L.A. in near silence, me kicking myself for driving all that way, her realizing that Newport Beach was a real place that had nothing to do with a television show. Teens really would like it, though – the little shops, the surfing, the beach.

As we drew near the airport to flee – I mean, leave – L.A., we got off the San Diego Freeway at Rosecrans Avenue near Manhattan Beach. Exhausted, we stopped at a grocery store, Bristol Place, to eat lunch in their cafeteria and use the rest room behind the meat department.

From our lunch table we could look out the window. Next door was Raleigh Studios, a big, bland, tan soundstage and office complex. It looked a little bit like Costco.

"That’s where ‘The O.C.’ is shot," I said, taking a bite of my California club avocado sandwich and pointing at Raleigh Studios. "Right there, inside those walls."

I wanted to add that the writers and carpenters and lighting people and cameramen and actors were clever to have created a show that seemed so real to teens.

But my daughter shrugged. It wasn’t important anymore.

She had already figured out that the world of Marissa, Ryan and the Bait Shop cannot be visited by tourists, except on the small screen on Thursday nights.

Later, Fox spokesman Jason Clark confirmed that except for establishing shots at the beginning of the show, "We do not ever film in Orange County," he wrote in an e-mail. "We did not film the Ferris wheel there, either ... It was shot in Long Beach in a parking lot." On a more positive note, the steps at Mount St. Mary’s College’s were seen in a recent episode.