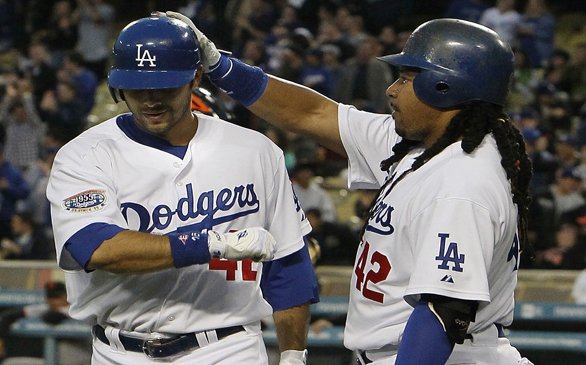 In last week’s column, I made the argument that the Dodgers’ weekend series against the San Francisco Giants could foreshadow the competition ahead between two of the Western Division’s strongest teams. I pointed out the strengths of both clubs, the Giants with their dominant pitching rotation and the Dodgers with their offensively solid starting lineup.

As the series unfolded, we saw the best and worst of both teams as well as reason to expect a heated rivalry this season. On April 16 the Dodger hitters went to town early, scoring seven runs in the first two innings off beleaguered Giant starter Todd Wellemeyer. Andre Ethier’s first-ever grand slam home run in the second inning highlighted the assault. But the game was almost lost for the Dodgers when starter Vicente Padilla was pulled after five innings and the bullpen collapsed yet again, nearly giving up the game in the ninth before reliever Ramon Troncoso closed things up for a 10-8 Dodger victory.

Despite the win, it was the sort of game an aficionado of the sport loathes, complete with sloppy fielding, low suspense and a hideous injury. The latter event came in the fourth inning, when Padilla threw a high and inside 87 mile per hour breaking ball, which struck Giant center fielder Aaron Rowand in the face and promptly broke his jaw in two places. The muscular Rowand fell into a heap and did not rise until several minutes later when he was escorted off the field by the team’s medical staff. Rowand, who will likely undergo surgery to insert a metal plate in his jaw, is sidelined for a minimum of 15 days.

The Giants, understandably peeved, came roaring back the next day with an ugly 9-0 drubbing of the dazed Dodgers. Giants ace Tim Lincecum took no prisoners in six scoreless innings of work, giving up only four hits and striking out seven.

April 17’s getaway game at last provided a little excitement. The Dodgers’ 22-year-old Clayton Kershaw and Giant veteran Barry Zito were each in top form going into late innings with respective shutouts. The Giants took the lead with a solo homer in the seventh, while Manny Ramirez came off the bench in the eighth to slug a go-ahead two-run homer. It was all the offense the Dodgers needed to win the game and the series.

It will not be until late June when the two teams face off again in San Francisco. Then, perhaps, we will have a better idea of each teams’ longterm capabilities. Rowand’s broken jaw may be mended by then, but it is doubtful that either team will forget what has thus far transpired.