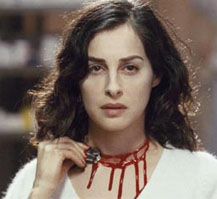 Based on her own novel, Pornocratie, French writer-director Catherine Breillat once again pushes the envelope and walks a thin line between what is pornography and what is art with Anatomy of Hell. And like her last two films released in the U.S. – Romance (1999) and Fat Girl (2001) – Anatomy of Hell takes a philosophical, yet graphic study of the sexual relationships between the male and female species. As with all of her films, the audience is able to get into the head of the female protagonist or, for that matter, Breillat’s head, as she subjects us into helping her find answers to the necessity of the male-female relationship.

The film opens at a gay nightclub where a young woman, played by Amira Casar, attempts suicide by slashing her wrists in a restroom. A gay man who finds her intriguing after she simply touches his arm soon rescues her from her demise. While leaving the nightclub, the woman also becomes intrigued and offers him (both characters are simply known as “the girl” and “the guy” in the credits) a lot of money simply to watch her over a four-day span at an isolated house by the ocean. These four days also happen to take place during the girl’s menstrual period.

Like she had done previously in Romance, Breillat casts adult film star Rocco Siffredi in the role of “the guy.” His character hates women and has repulsion for the female anatomy, for which he uses the four days to “explore” and philosophize with her over it. With her usual twistedness, Breillat allows “the guy” to use various objects to infiltrate “the girl,” as well as forcing “the guy” to consume “the girl’s” bodily secretions, all in the hope that the two of them will find the answer as to why men and women are so different.

Although Breillat can make a film-going experience uncomfortable with some viewing her film as pornographic, in the least, she keeps the viewer’s eyes glued to the screen. And with Breillat’s gift for philosophy thrown into her screenplays, she is one director who is keeping avant-garde cinema alive.