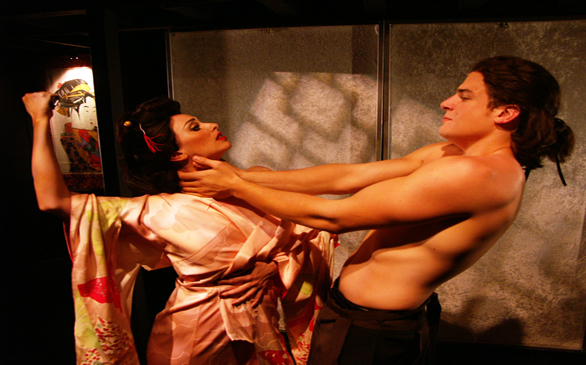 Michael John LaChuisa’s profoundly entertaining new musical, “See What I Wanna See,” is making its West Coast premiere at the Blank. It explores sex, murder and religion all in one show. The five-person cast takes an ingenious stab at the age-old question: What is truth?

The musical is based on three short stories that take place in medieval Japan, 1951 New York City and the present. Within the small yet strong cast, each actor portrays multiple characters to great effect. Right off the bat, “See What I Wanna See”’s opening number sets up the production flawlessly. It is quite intriguing to watch this unique plot unfold. There are a few intimate scenes that are executed brilliantly. The music is fresh, enjoyable and sung effortlessly by these actors.

The women outshine the men with their magnificent voices, but as a chorus, the cast is breathtaking. It’s very refreshing to see that each role is suitably cast, but Lesli Margherita truly steals the show in both of her roles. She shines with her songs, “Kesa” and “See What I Wanna See.” Her steep vocal range paired with her spot-on acting choices make her unstoppable in this role. It is no wonder she received an Olivier Award in 2009. Jason Graae is an engaging performer and really carries the second act. Doug Carpenter is captivating in his roles as well, and you’re left wishing you saw more of Perry Ojeda and Suzan Solomon.

Daniel Henning’s staging is excellently crafted. Though it’s merely a black box theater, he utilizes the entire space and keeps the show constantly active. Musical director David O and his orchestra conquered this beast of a score exceptionally well. Audiences are sure to be impressed.