Dirty Hands: The Art and Crimes of David Choe 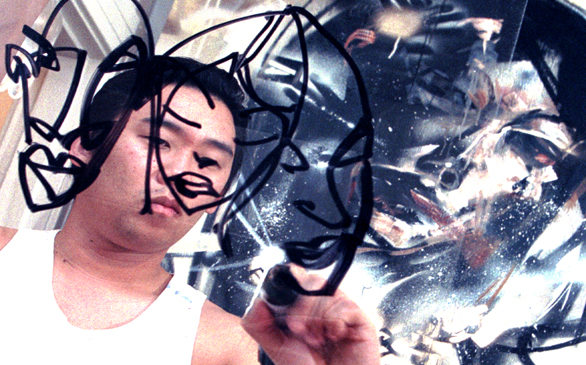 The filmmaker of Dirty Hands, Harry Kim, has devoted 10 years of his life to documenting the story of street artist, David Choe, who, as with so many gifted beings, lurches from dysfunctional to self-destructive behavior as he is drawn inextricably into the darkness that tantalizingly beckons. So why did Mr. Kim choose to center a decade of his life on such a tortured subject? As most unique things are created: complete chance.

Kim met Choe in Korean-American summer camp in 1990 and, as the only metal heads in the group, they bonded and have been friends ever since. Unlike Choe, Kim followed an academic route and completed a degree in media before finding a career in IT. He’s self-taught, which puts him in the maverick group, which could be why an artist like David Choe allowed his friend to get up close and personal.

After spending his last dime and every waking moment on the film, Kim finally completed Dirty Hands and began the festival route. There’s nothing remarkable about getting your film in one of the hundreds of festivals around, but to get your film accepted in the Los Angeles Film Fest when you have no personal contacts is extremely difficult, and Dirty Hands did just that. It is equally difficult to attract the praise of seasoned critics, but this film has managed to do that too.

Choe is obviously an interesting character. Talk about his time in jail, solitary confinement in Tokyo and his new attitude upon release.

If anyone finds hell in solitary confinement, it’s Dave. It’s kind of why he goes bombing. He’s likened street artists to strippers of the art world. They are exhibitionists with fucked up issues. Dave goes crazy when he has to face stillness. Part of my guess is that he’s hard on himself and if he’s the only person he can listen to, it can really mess with him. So while his transformation from thief to holy roller seemed to come out of left field, it was understandable at the same time. Christians call this being ‘on fire,’ when you first convert to Christianity and you go around telling everyone and trying to convert people. This, of course, changed everything. When he returned, he avoided all of his old friends. I guess it was just a matter of time before he went back to dirty old Dave again.

What were the best and worst parts about making this doc?

Isn’t there a whole novel dedicated to the best and the worst of times? I think that could best be summed up in a montage. Or maybe as a glimpse into Dave’s bipolar state. Being on the move, thumbing it and seeing Congo and the century old small towns of China, is exhilarating and tiring. It’s a great escape and it’s also running from your life. It’s the yearning for home and the depression of being home. It’s getting away with it and then paying the consequence in a jail sentence or a six-figure gambling loss. It has been 10 years of looming debt driven by little nuggets of Eureka, like hits from a crack pipe, that keeps me in the game. In the end, I’m here, for better or worse, because of Dave.

Kim is now beginning the process of finding a way to get his film out there. He has arranged screenings in both Los Angeles and San Francisco, which are open to the public.

When asked whom he thinks will attend, Kim seems inclined to think it will be a cult audience. But as much as this film will appeal to every active and aspiring graffiti artist in existence, there is a much wider audience who is fascinated by flawed characters, and this documentary depicts just that.

Choe returns to Los Angeles after a six-year absence with an art exhibit, Nothing to Declare, at Lazarides (320 N. Beverly Drive; lazinc.com) through May 23.